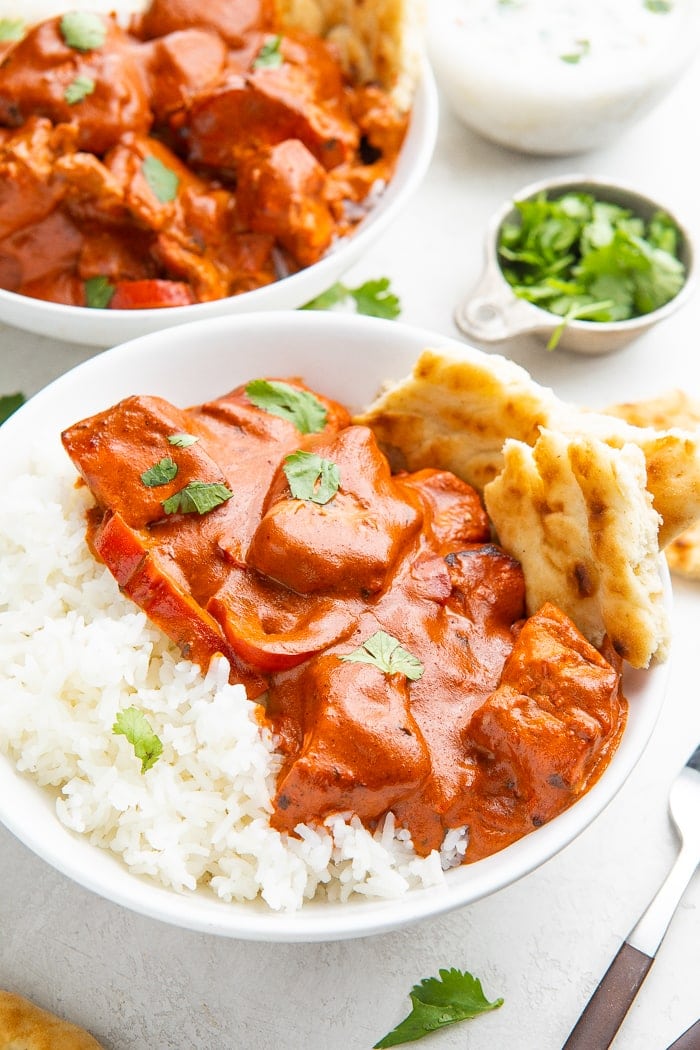 Having never before tasted a spicy and sour rassam, never dunked a crispy piece of pakora in bright green chutney, never fought over the last gulab jamun in the order, most of us start with chicken tikka masala. It’s considered the official dish of the United Kingdom and is almost certainly the unofficial first-timer’s order the world over. Maybe it’s the description on the menu:

Pieces of chicken tikka cooked in a creamy sauce with fresh tomato and exotic spices.

I see a few words in each of those descriptions, don’t you? Tomato. Cream. Butter.

Indian cuisine neophytes across the country are pointing at that item on the menu, claiming “It couldn’t be bad.” And oh, are they so very wrong.

This recipe for chicken tikka masala is quite possibly the heavenliest dish on the face of the planet if you’re asking me (and you are, aren’t you?). The heady mix of spices, the slow-cooked onions, and garlic, the creamy, buttery ho-my-goodness sauce: it draws most Indian food newbies in instantaneously, converting them for life. 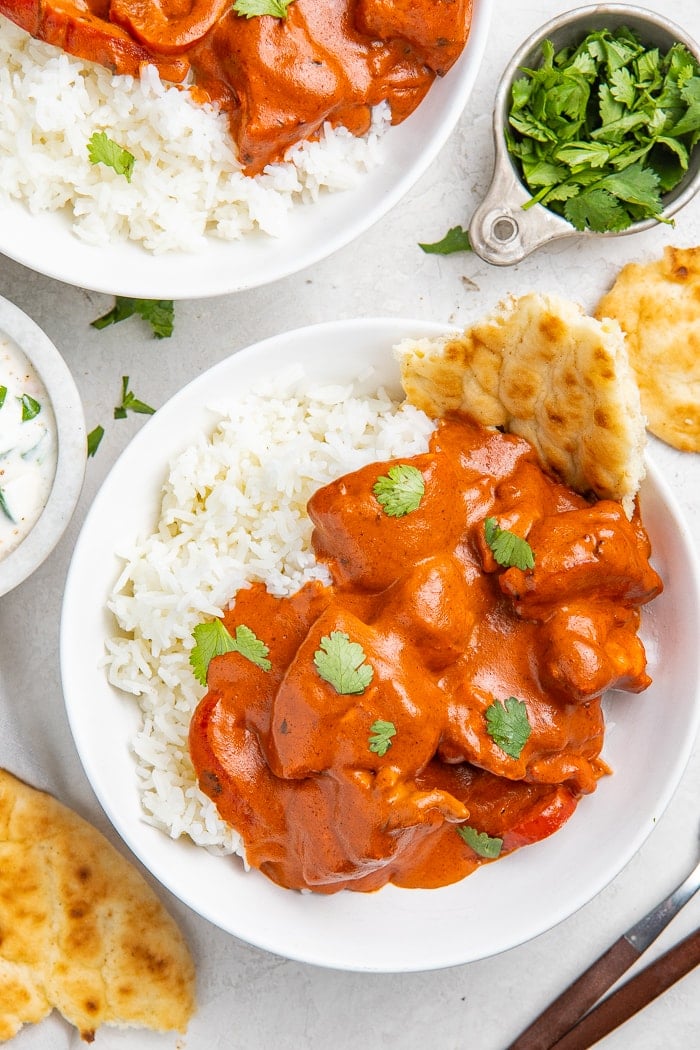 So a little while back, I decided to do some research into what restaurants really do to produce that unbelievable dish. I read through plenty of theory, different elements that combine to create the dish you know and love. I paired those new techniques with a recipe I had been developing and most importantly, I had very low expectations.

And so when I tasted that first bite, it was a sheer delight when I realized I’d done it. Finally, the restaurant style chicken tikka masala recipe I’d been dreaming of! The slow-cooked onions, garlic, tomatoes, and spices; the rich and creamy half and half; the heady spices and fenugreek. It surpassed every previous attempt I’d made with flying colors.

Why this is the best chicken tikka masala recipe

Do not skip the caramelization process either with the aromatics or the tomato sauce. If you do, you’ll end up with a less-than Indian curry, and not the best chicken tikka masala recipe ever! Seriously, if you make this and find it isn’t the best ever, you didn’t caramelize it all long enough!

I repeat – do not skip the caramelization process!

I used full-fat plain yogurt as a marinade, but if you’re paleo or on a Whole30, you can skip that without missing too much. And if you’re dairy free, use 2 cups solid coconut cream in place of the 2 cups half and half.

Where can I find fenugreek leaves?

Fenugreek leaves are optional but oh, they put the dish over the top. Do use them if you can find them! I bought a big box at an Asian market and have barely made a dent in it. If you like Indian food, you’ll be super happy to have a box of fenugreek leaves at home. I use them in my saag chicken recipe, too, and they really take things over the edge.

This chicken tikka masala also has dairy-free options and works for a Whole30 or paleo diet. It’s gluten and grain free, includes no sugar, and no processed anything! All real food love.

How to make the best chicken tikka masala

Marinade pieces of chicken in a mixture of plain yogurt, turmeric, lemon juice, garam masala, black pepper, and dried ginger. Cover and refrigerate at least 1 hour, up to overnight. 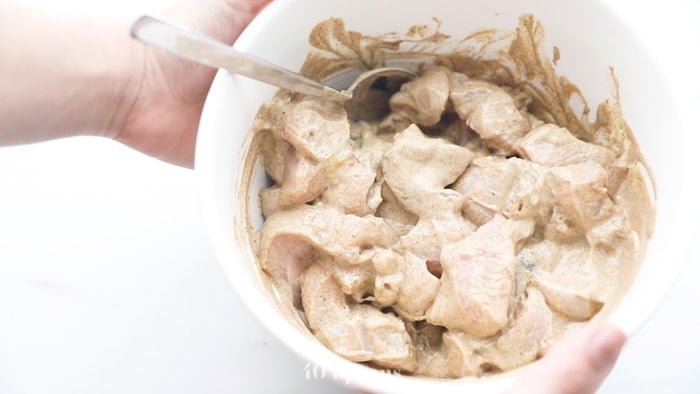 When you’re ready to make the sauce, cook your onion in ghee in a large skillet over medium heat until softened, about 5 minutes. Then add your chiles, garlic, ginger, and reduce your heat. Cook, stirring occasionally until the mixture turns a nice medium brown, almost toffee color, about 20 minutes. Don’t skip this step, please! Add a little water here and there if the mixture is sticking, but absolutely don’t skip this part. Finally, add your garam masala and paprika and stir. Cook for a few minutes, adding a little water as necessary, or until the mixture is fragrant. 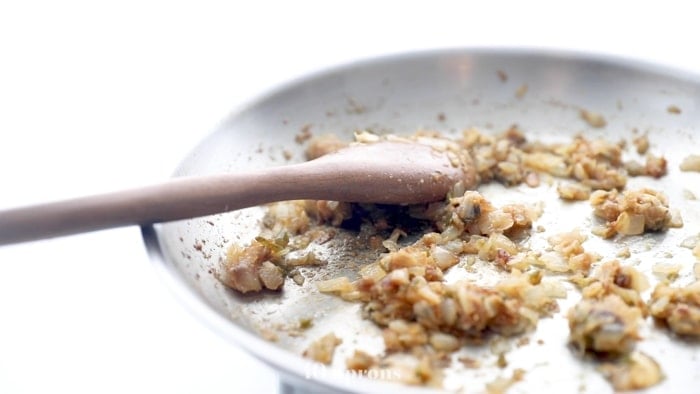 Add the tomato sauce and stir, then transfer the mixture to your blender and process until smooth. Return to the skillet and add your bell pepper, fenugreek leaves, and salt. Simmer for about 30 minutes on medium-low heat until thick and paste-like. Don’t skip this step; it’s super important for the ultimate taste and creaminess of the dish! 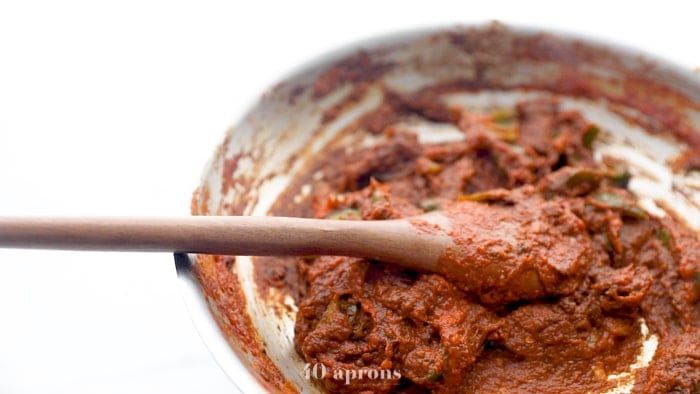 Meanwhile, cook your chicken: Preheat your broiler then place chicken on a wire rack over a baking sheet. Throw away your marinade. Broil, flipping in the middle, about 8 minutes, or until chicken is browned in spots. Set aside. 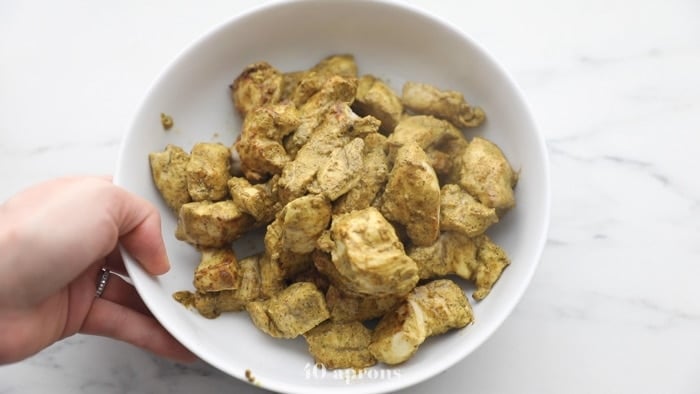 When your tomato mixture is nice and thick, add the can of coconut cream, half and half, or heavy cream and stir until very smooth. 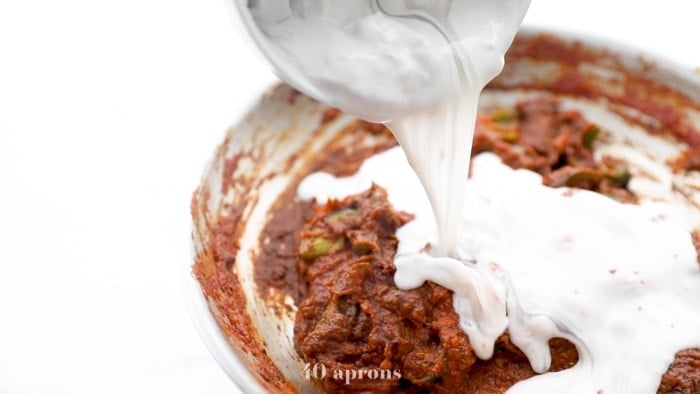 Taste and correct seasonings, adding likely more salt. Stir in your chicken and serve over basmati or cauliflower rice with naan, if you do that sort of thing. Garnish with lots of chopped cilantro. 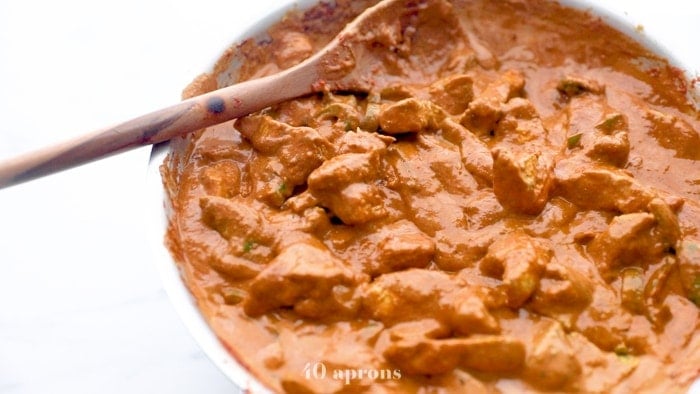 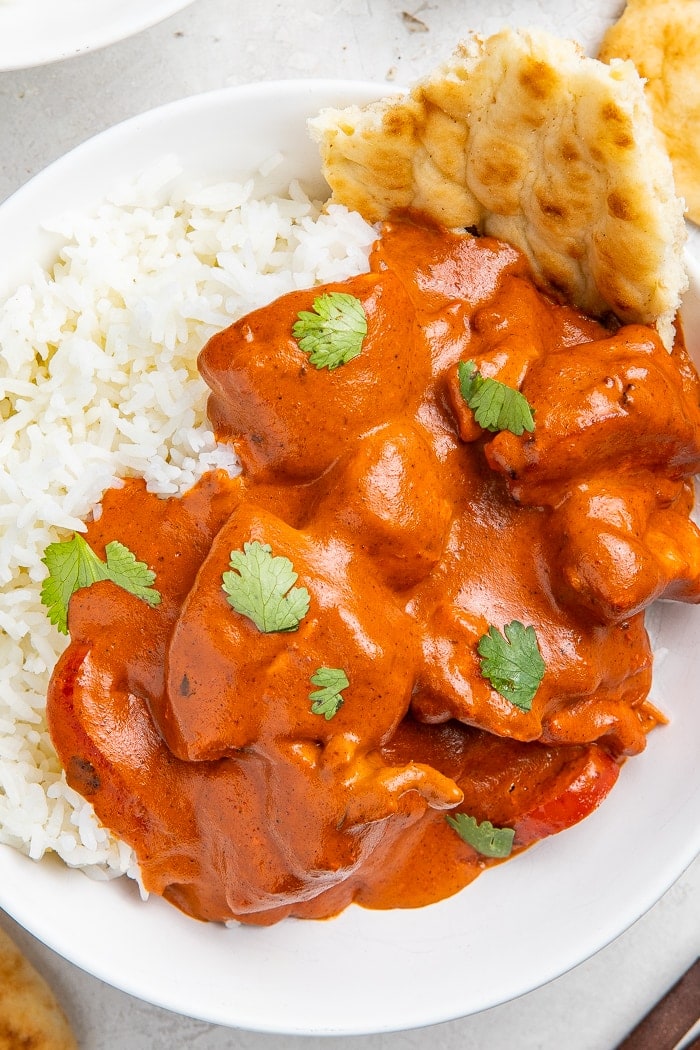 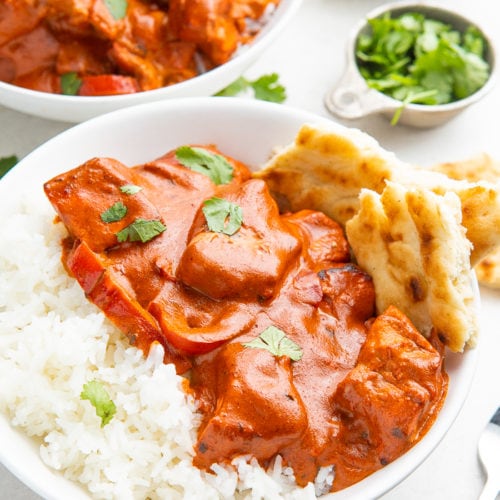 If you're on a Whole30, you can use a compliant non-dairy yogurt, like Kite Hill unsweetened, to marinate your chicken. You can also skip the yogurt entirely and simply marinate the chicken in spices and lemon juice, or use canned coconut milk to replace the yogurt.

Use 2 cups coconut cream (just the solid white part of a can of coconut milk or cream) in place of the half and half.

I prefer to use about 2 cups of pure coconut cream, just the thick, solid white part of a can of coconut milk. You can use one can of full-fat coconut milk, if you prefer, but the sauce won't be as creamy. If you're not on any specific sort of diet, try about 2 cups of heavy cream or half and half to enrich the sauce!

I use deggi mirch powder, which is similar to paprika but a vibrant red, in my chicken tikka masala. It gives the dish a brilliant hue and especially authentic taste. I highly recommend ordering a box if you make Indian food, like my chana masala, butter chicken, or chickpea tikka masala, with any sort of regularity!