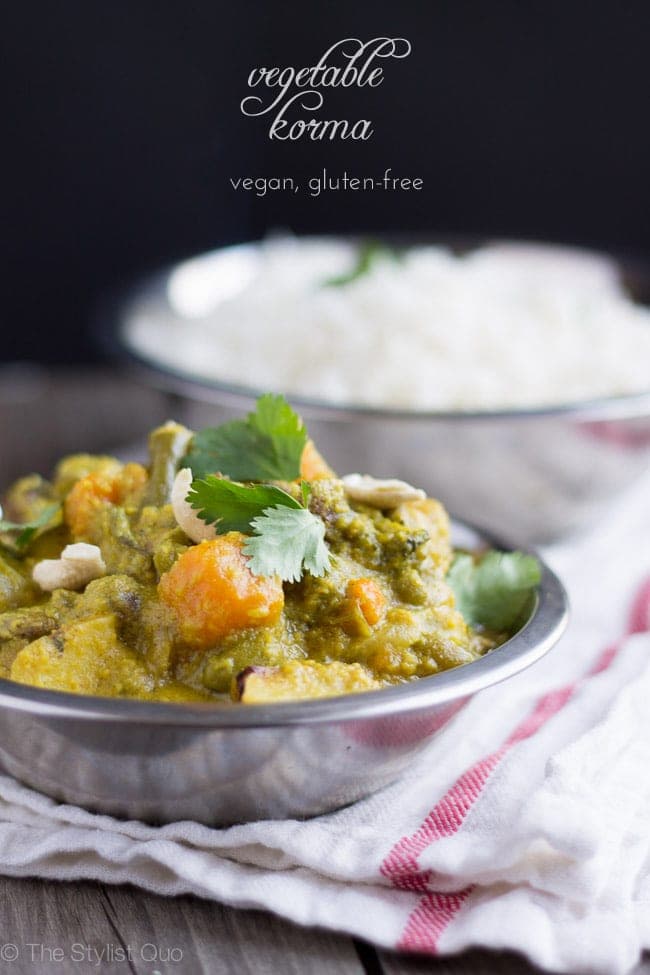 In high school, I had an eccentric friend who dragged us to a local Indian restaurant at the start of every weekend. For some reason, I thought, at the time, that I didn’t like Indian food, but as I partook in my friend’s habits–consistent dishes, cracking our papadum on the count of three, and unabashedly dancing along to the Bollywood music videos playing–I quickly fell in love. One of the dishes we always ordered, along with chicken tikka masala and saag paneer, was vegetable korma. 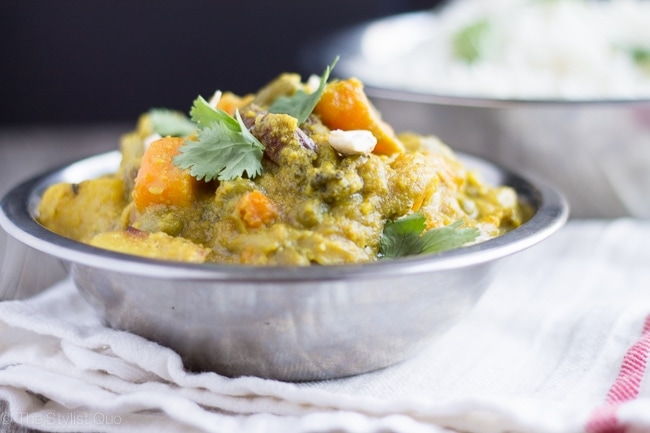 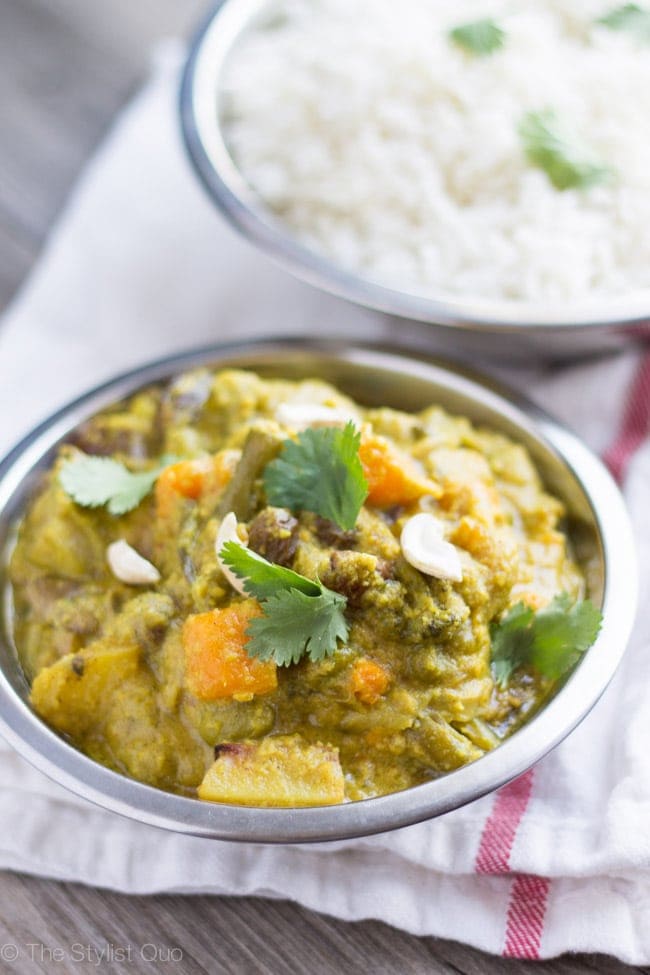 Oh, ohh, korma. The rich, subtly coconutty sauce, packed full of only the best vegetables (no bell peppers in sight!), the turmeric-tinged bright yellow, a shade so vibrant and seemingly only found in Indian cuisine. During my exploratory culinary years in college, I tried recreating the dish as I taught myself how to cook, using jarred sauce. The results were always just OK–tasty, to be sure–but paling in comparison to the real stuff of Indian joints. Of course, the realer stuff in India I’ve yet to eat, but I’ll save that comparison until after I get to cross that trip off O’s and my bucket list. 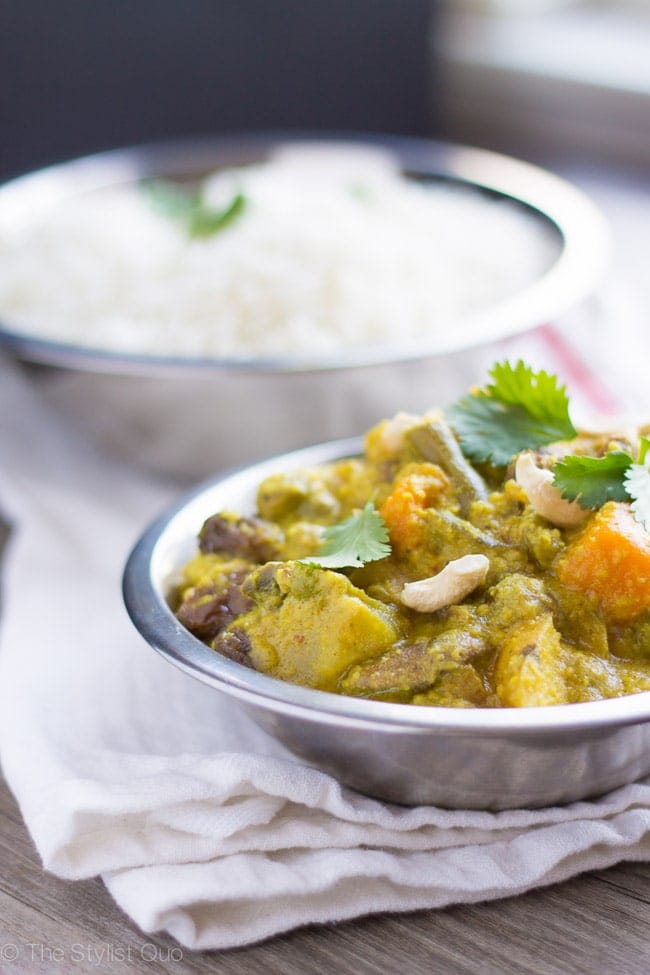 It wasn’t until last year that I whipped together this super easy cashew and coconut milk-based korma that I discovered how simple it was to recreate the restaurant dish taste at home! Soak some cashews, blend a bunch of stuff, sauté and onion, and simmer a bunch of veggies in the sauce – could it be easier? Well, yeah, you could pick up a jar of Palak’s Korma Curry Simmer Sauce, but the quality leap from “semi-homemade” to homemade (I hate you, Sandra Lee. I just had to get that out there) is drastic. In other words? So worth it.

The cashews provide a rich nuttiness that blends beautifully into the creamy coconut milk, balanced with some spicy curry powder to produce a dish you’d never know was vegan. O turned up his nose when I told him it was korma for dinner, but after literally three bowls, he changed his mind and proclaimed his love for the stuff. It’s an incredibly simple way to pack those you love full of nutritionally-dense veggies, without having to pin them down–your knees on their elbows–and force-feed them handfuls of curly kale. 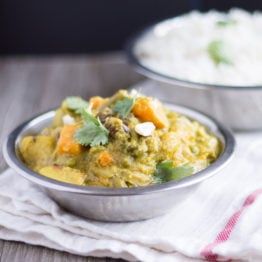 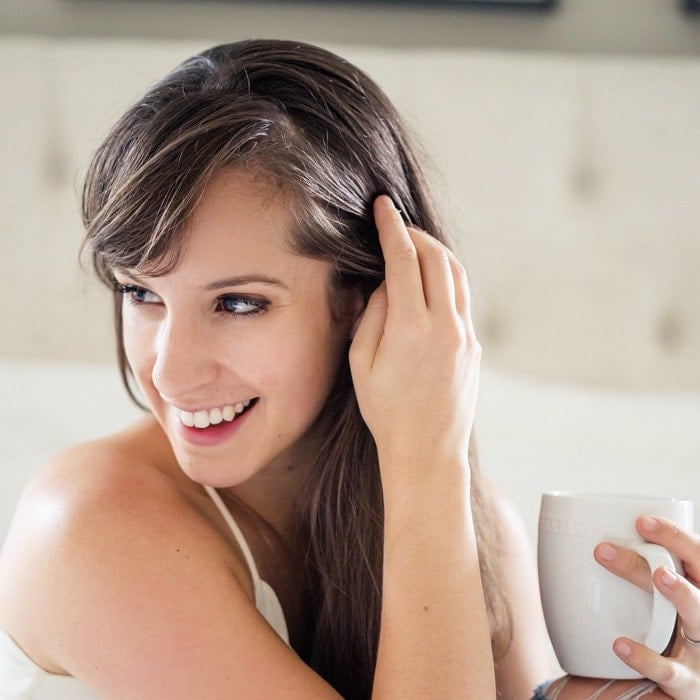