A takeout-style cauliflower fried rice with chicken that’s super flavorful and filling. A quick and easy Asian one pan dinner recipe that the whole family will love. Low carb, real food, plus paleo and Whole30 friendly.

Got kids? Then let me explain this recipe for cauliflower fried rice with chicken on a level you’ll truly understand:

My toddler ate it. Lots of it. For two separate meals. Without complaining.

Thanks for visiting, bye!

Really, though, that’s all I ever need to know about a recipe. Because, toddlers, right? They’re the pickiest, prissiest dinner guests you’ll ever have, except they dip their celery in ketchup and would eat chicken nuggets for 3 meals a day if you’d let them, so the cognitive dissonance as their line cook? It’s so, so real. 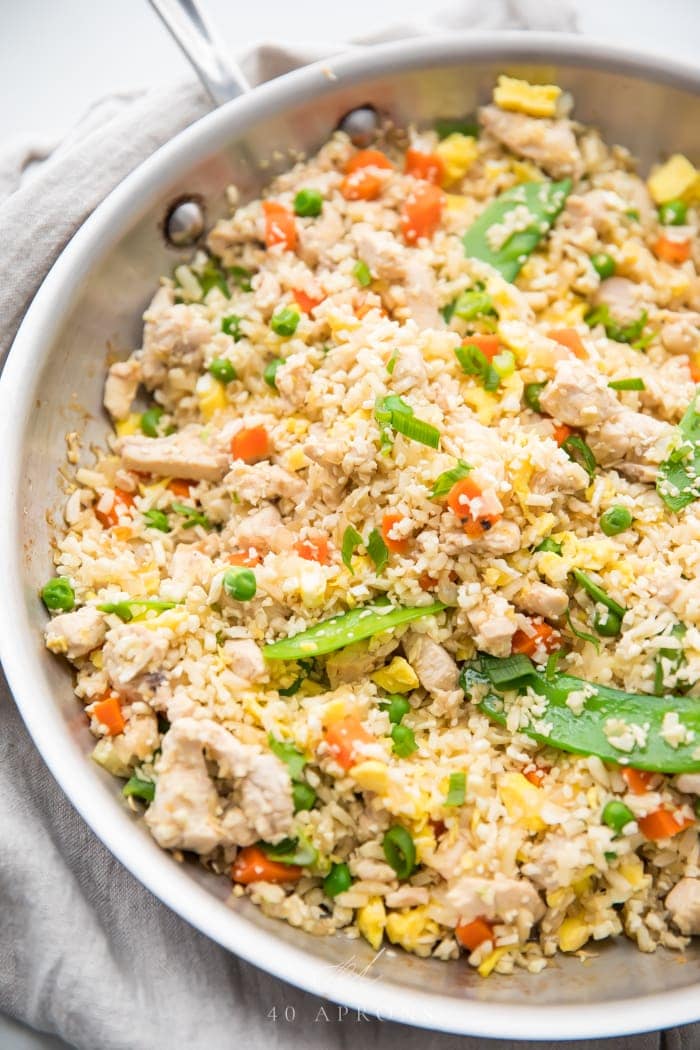 I developed it, in fact, after takeout flavors, making sure to not overdo any one flavor but let the subtle sweetness of the peas and carrots shine through, ensuring the rice itself is kept neutral but flavorful, keeping it simple and delicious. I simplified flavors that might be delicious in another dish, but for takeout-style cauliflower fried rice with chicken?

What makes this recipe is so good 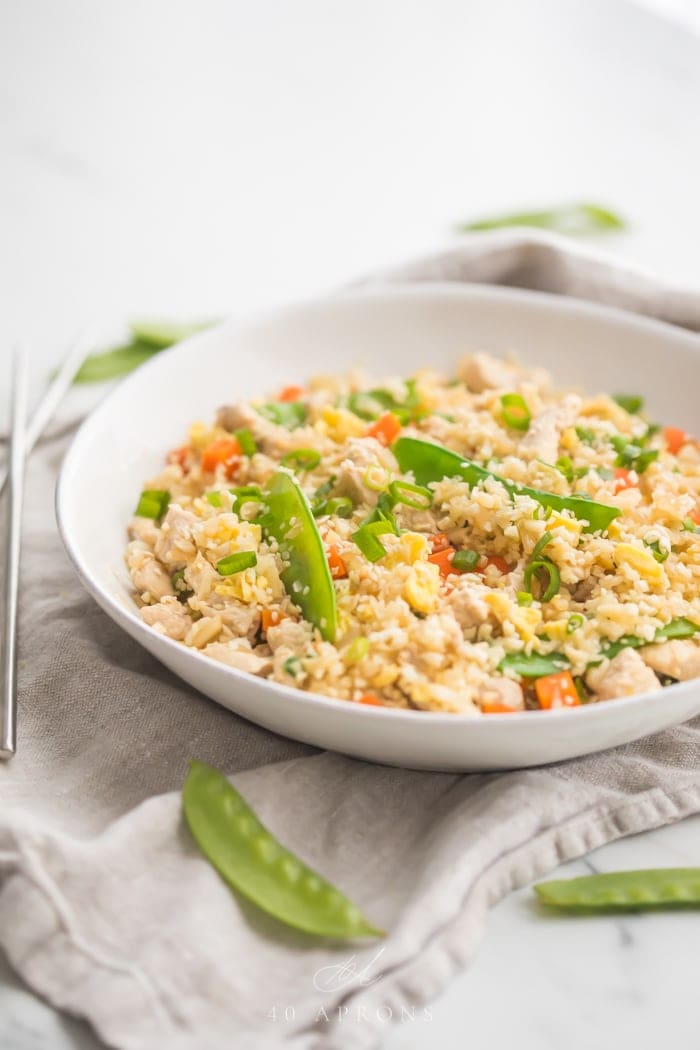 Why you’ll love it

This recipe is not, as written, Whole30-compliant, but you can make it so with just one substitution!

Make sure you use 2 tablespoons coconut aminos instead of soy sauce (Which you cannot have on a Whole30, of course). You’ll also want to make sure you season your cauliflower fried rice with more salt than you otherwise would if using soy sauce since soy sauce is saltier than coconut aminos.

Also, try a glug of Red Boat fish sauce to add that nice umami and saltiness that you’d get from soy sauce.

And make sure you do not use green peas in your veggie mixture, but snow peas are OK.

There are so many variations possible within this cauliflower fried rice with chicken recipe, they’re basically endless! Here are a few: 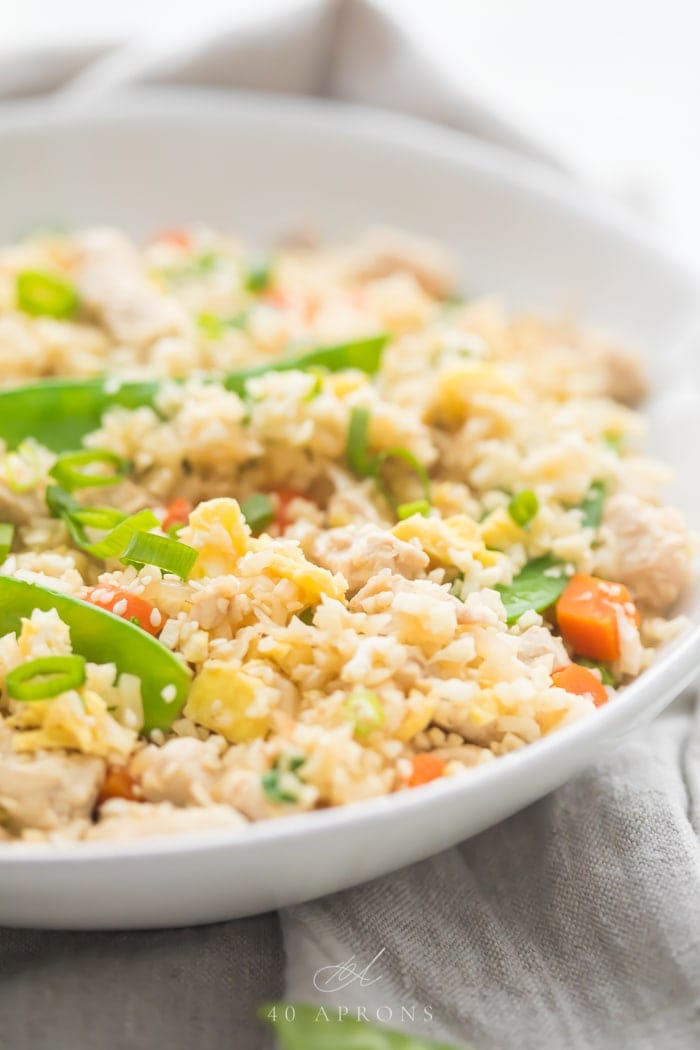 How to Make it

Start by cooking your egg: heat 1 teaspoon of sesame oil in a large skillet over medium-high heat. Pour in the whisked eggs and cook like a pancake until just cooked on the bottom, about 30 seconds. Season the top with salt and flip with a spatula as best you can, big pieces are OK. Cook on the second side until just cooked through, another 15-30 seconds or so. Transfer to a cutting board, let cool slightly, then chop.

Return the skillet to the stove and add 1 tablespoon sesame oil. Cook the green onions about 2 minutes or until softened, stirring frequently. Add the garlic and ginger, stirring constantly, about 30 seconds or until fragrant.

Season the chicken with plenty of salt then add to the skillet. Stir fry, stirring constantly, about 2 minutes or until mostly opaque. Add veggies and cook about 2-4 minutes or until just tender. Simmer until most of the liquid in the pan evaporates, about 1-3 more minutes.

Add 1 more tablespoon sesame oil to the pan, followed by cauliflower rice. Cook until rice begins to soften, about 3-5 minutes. Stir in cooked egg, soy sauce, and vinegar, and cook for another 3-5 minutes or until liquid in the bottom of the pan has evaporated.

Garnish with remaining green onions and sesame seeds and serve. 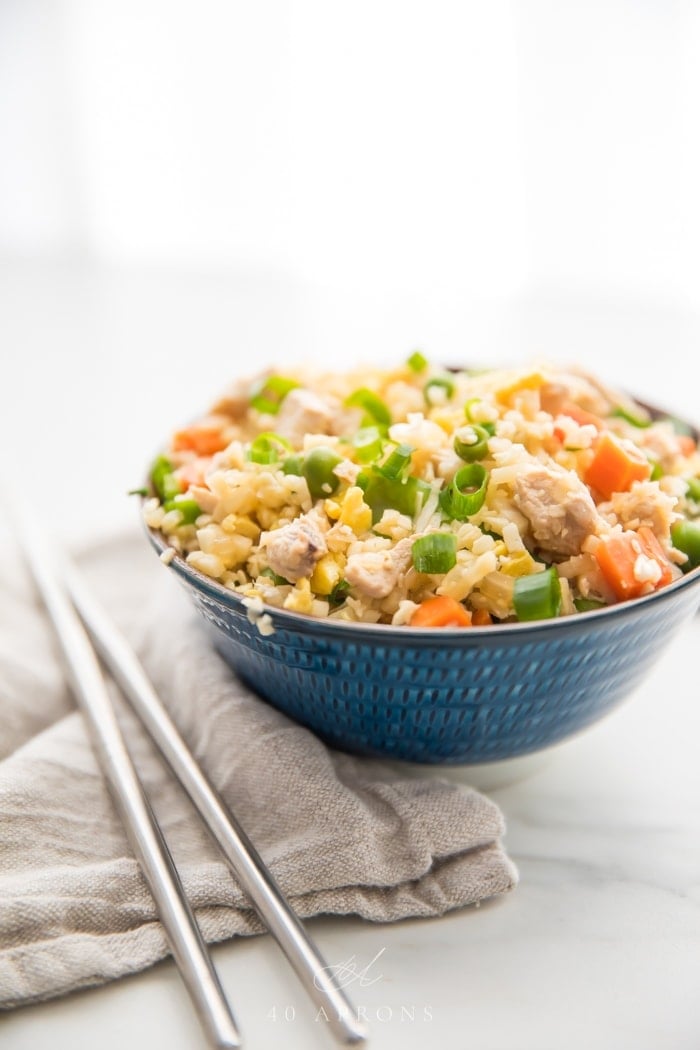 Note 1
If on Whole30 or paleo, use 2 tablespoons coconut aminos plus more salt instead of soy sauce. Omit soy sauce altogether. Also consider adding a glug of sugar-free fish sauce to the mixture when the coconut aminos go in. Note 2
If on Whole30 or paleo, do not use green peas. However, snow peas are OK on Whole30. Note 3
If on Whole30, make sure your rice vinegar has no added sugar. Rice vinegar itself is compliant but it is frequently found "seasoned," which almost always has non-compliant ingredients.