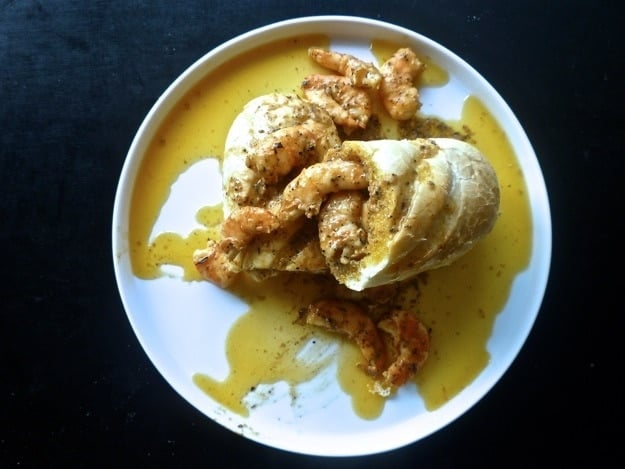 When O and I went to New Orleans, we fought. Not a lot. Just once. Over what?

For weeks he’d been begging me to promise we’d, if nothing else, go to his favorite poboy shop, Liuzza’s By the Track. For weeks I’d promised, yet he continued to beg me to promise. I kept promising, but he kept begging.

After we ate, I think I understood why.

So when the “house special” at Liuzza’s, about which O had been dreaming for at least weeks, was described as “Cajun BBQ Shrimp”, I wrinkled my nose and politely ordered the garlic oyster po’boy. I envisioned something that looked like innards, stuffed into a pistolette–shrimp in ketchup, sugar, and cajun seasoning. When the Cajun BBQ Shrimp po’boy arrived, however, O and I fought.

Cajun BBQ shrimp po’boys really boil down to a few things: shrimp, bread, butter, Worcestershire, a bit of lemon, and a lot of cajun seasoning and black pepper. What about that is even remotely similar to thick, blood-red ketchuppy sweet barbecue sauce? You’re on my side, right?

I explained my cycle of guilt in our New Orleans Photo Diary, but all you really need to know is that it culminated in my desperate search for a replica. What I found was a recipe calling for a stick of butter per four cajun BBQ shrimp po’boys. Knowing that, I could’ve written this post without even testing the recipe; how could it be bad? But for you, dear readers, I took it upon myself to test it out, and it was fabulous. It’s easy enough for a weeknight, as long as you eat salads and other general rabbit food for the rest of the week. I roasted the shrimp, which seasoned and cooked them perfectly, and served with oven fries with mayonnaise.

My hatred of ketchup is, at the very least, consistent.

If you’ve never had a Cajun BBQ shrimp po’boy, please try this. You’ll thank me. If you’ve been to Liuzza’s, I know I don’t even have to ask you to take a shot at it. I know you’re already heating up the skillet and peeling shrimp. 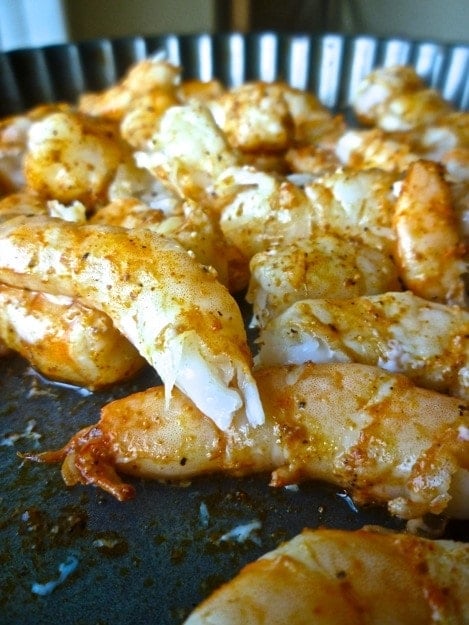 I tore the shrimp in half, as they were a bit large for this application. It was all we had, but if you’re shopping for this recipe, get something like a 41-50 count. 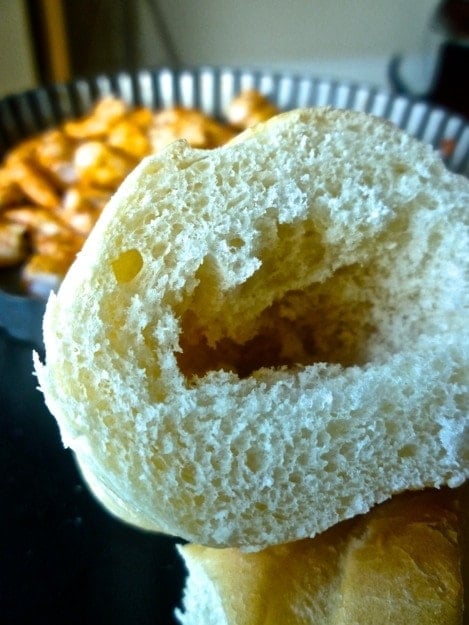 For authentic bread, use your thumb and forefinger to pinch out bread from the center of your baguette, essentially hollowing it out for stuffing. 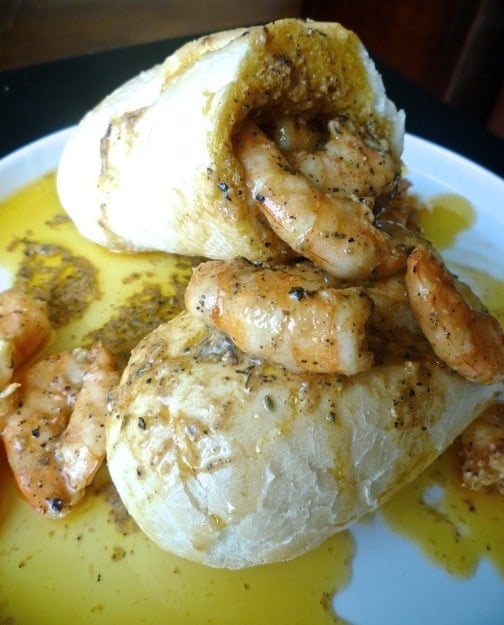 Don’t even attempt to hide the butter.

Before you begin cooking, cut the ends off of the rolls you’ll use for the po’boys. In New Orleans, they use French bread pistolettes. Here, you could use your favorite hero, sub or hoagie roll. After you’ve cut the ends off the rolls, hollow out most of the bread using a wooden spoon or your fingers.

Roast the shrimp: coat raw shrimp with olive oil and spread out on a baking sheet. Sprinkle with salt and pepper and toss to combine. Roast for five to six minutes.. don’t overcook! Set aside for a bit.

In a medium oven-proof skillet, combine the butter, olive oil, garlic, black pepper, Worcestershire sauce, dried thyme, Louisiana hot sauce, and salt. Heat the mixture over medium-high heat and stir the ingredients. Place the lemon slices in the skillet and give any extra slices or the end lemon pieces a squeeze over the sauce. Cook for about five minutes.

Right before serving, remove lemon slices and garlic and add shrimp. Toss the shrimp totally in the sauce, then spoon shrimp and sauce into hollowed-out bread.