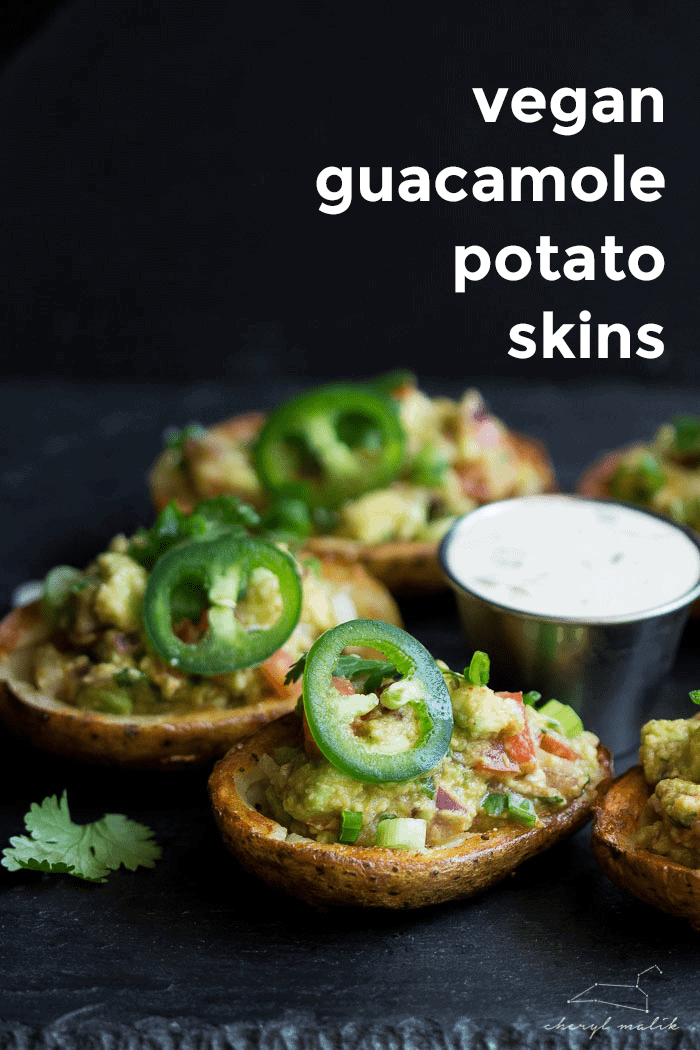 When I was little, my family went to TGI Friday’s often due to my sheer adoration of the “broccoli cheese”, making it for don’t-know-what-else-to-get weeknights, as well as birthdays, completely with a balloon tied to the back of the chair, and post-dance recital celebrations. But perhaps more than the broccoli cheese soup, my memories are of the potato skins–crisp and crunchy, topped with melty cheesy and salty bacon, dunked into cool sour cream laden with sweet green onions that lent a lightening taste of the garden. 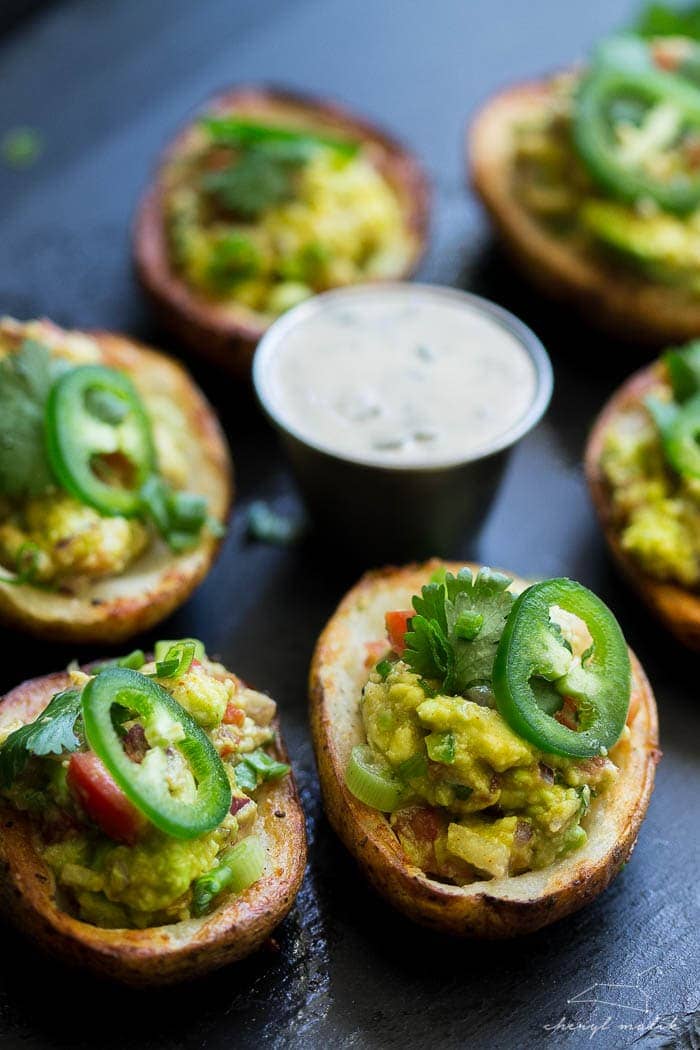 So now, twenty years later, I still crave those little crispy boats whenever any football-related event begs for junk food. The only problem is that deep frying potatoes and layering them with butter, cheese, bacon, and sour cream makes them anything but healthy.. and certainly anything but vegan. But that doesn’t keep me from indulging! Except, of course, making them my way. 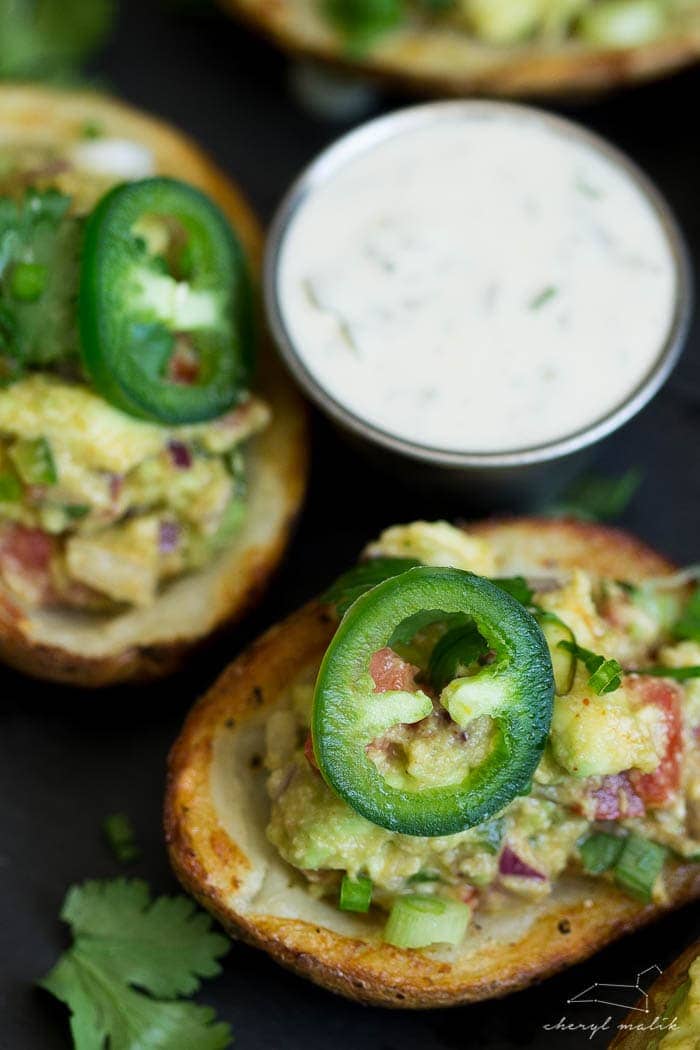 Instead of swapping out every animal product with a processed vegan alternative, I decided to opt for a rich and creamy topping that’s full of flavor and festivity–guacamole. Everything is better with guacamole, as we all well know, and potato skins are most certainly included! You know what else makes everything better? Ranch dressing. And this vegan recipe does not disappoint. So while you wouldn’t mistake these bad boys for their bar food originals, you might just prefer them to their less-than-healthy counterparts. Why? 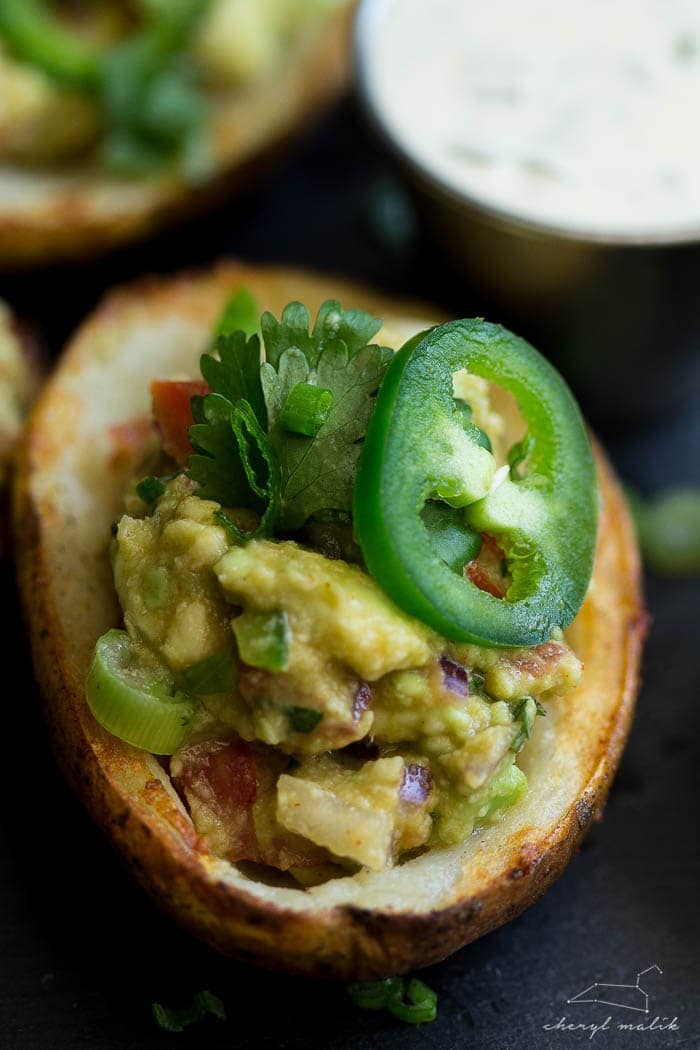 The skins are crisp and buttery and crunchy and a bit earthy, which makes for the perfect potatoey bed for the guacamole–creamy and rich and tart and spicy and smoky, it might just be the best guacamole you’ve had. Topped with a thin slice of fresh jalapeño and a sprig of cilantro, dipped in a cool, herbaceous vegan ranch, these guacamole potato skins are fit for company but simple enough to make for Sunday afternoon football, like O and I made for the atrocious Titans vs. Browns game. 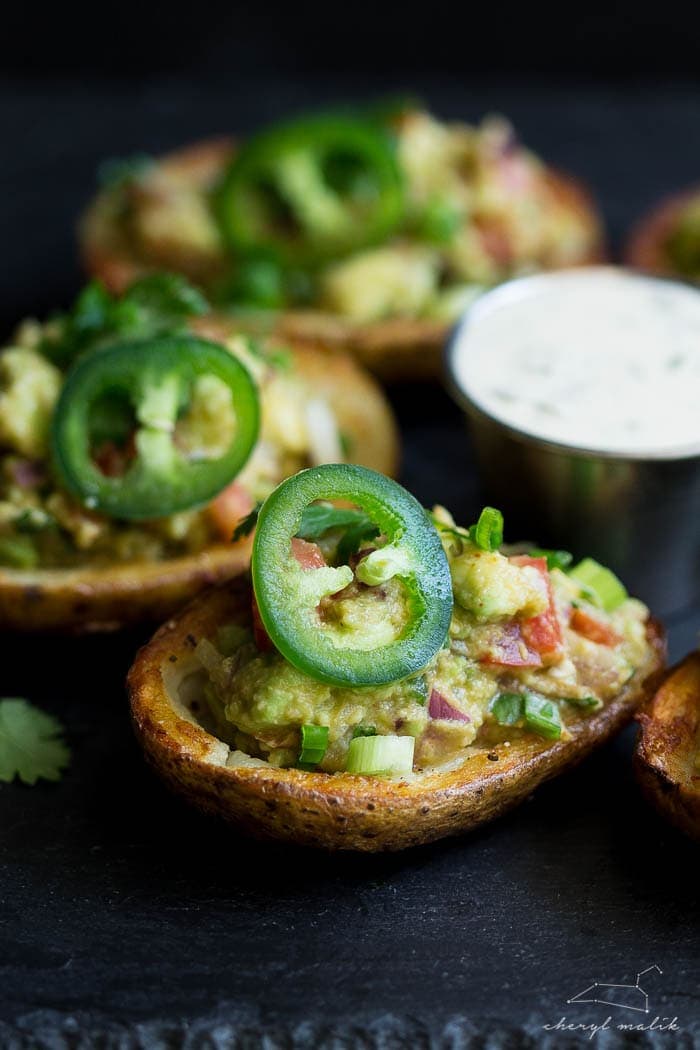 And seriously, if there’s any team that can blow such a huge lead, it’s the Titans. I’ve threatened divorcing them for a shinier, less-losing of a team, like the Seahawks, for a while now. I mean, hey, my paternal family is from Seattle and said family has been keeping us in the Seahawks merch loop for decades now (though the Seahawks green in the 90s was not quite so um… fancy). That counts, right? I also have a painful crush (though I can determine whether it’s a friend crush, a bodyguard crush, or a crush-crush) on Richard Sherman, of which O is fully aware.. and I think pretty approving. Then again, he paid quite a lot to get Marshawn Lynch on his fantasy team, and the boy doesn’t disappoint. Does this mean I’m officially adopting the Seahawks? Maybe… just maybe.