This vegan Nutella tastes just like the chocolate hazelnut spread that everybody loves, but it’s paleo, dairy free, refined sugar free, grain free, and way healthier! Great with just about everything and super easy to make. 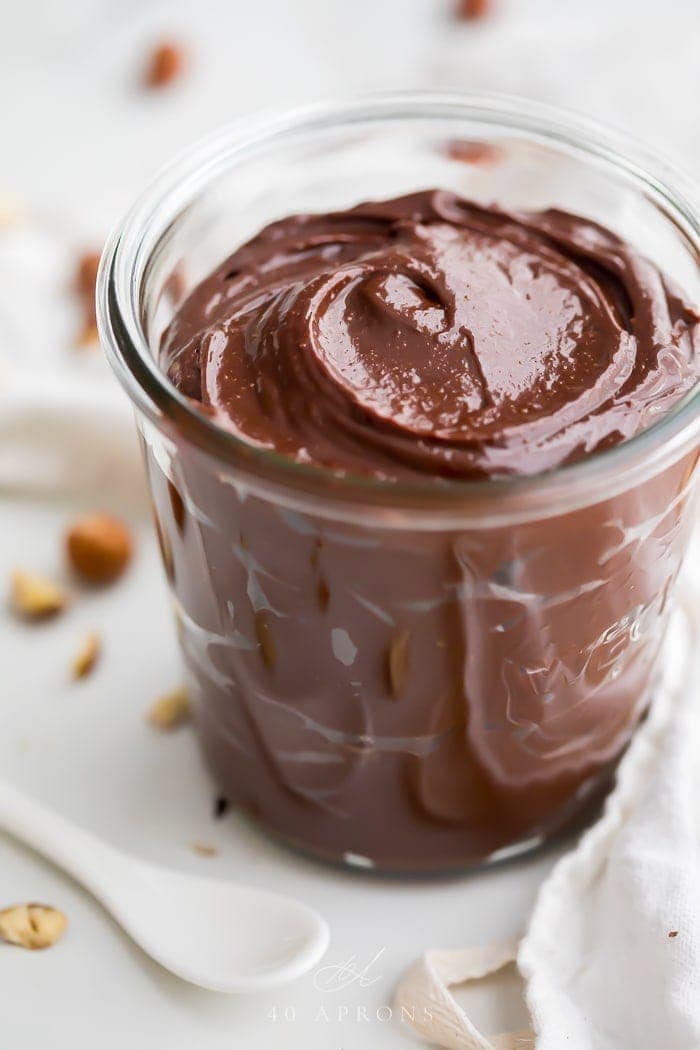 Nutella is one of those treats that so many of us eat “despite” our otherwise great, healthy diets. It’s worth it, right?

I mean… I’m not saying no. Nutella is creamy, rich, chocolatey perfection, and that’s a basic tenet of humanity.

Except you can make it yourself. Really easily. Paleo and vegan both! Did I mention it’s super easy? It’s super easy.

Not only is this homemade Nutella vegan and paleo, but you actually know what’s going in it.. and so you don’t feel quite so bad smothering your toast (or apples or cereal or fingers… whatever, I don’t judge) in the stuff for breakfast, followed by a breakfast-dessert of a spoonful straight from the jar.

Why This Vegan Nutella Is So Good

You’ll love the rich nuttiness of the toasted hazelnuts and how the flavor dances brilliantly with heady dark chocolate, the bitterness balanced with a bit of maple syrup and aromatic vanilla. This, my friends, is Nutella.

Plus, did you know that coconut oil is actually considered to have multiple health benefits? I don’t think that means we should all go guzzle a cup, but it’s been shown to contain a unique combination of fatty acids that boast medicinal properties and its medium-chain triglycerides can actually help you increase energy expenditure compared to other longer chain fats.

For more health benefits of coconut oil, check out this article at Authority Nutrition! Vegan Nutella with coconut oil? You. Are. Welcome.

How to Make Vegan Nutella 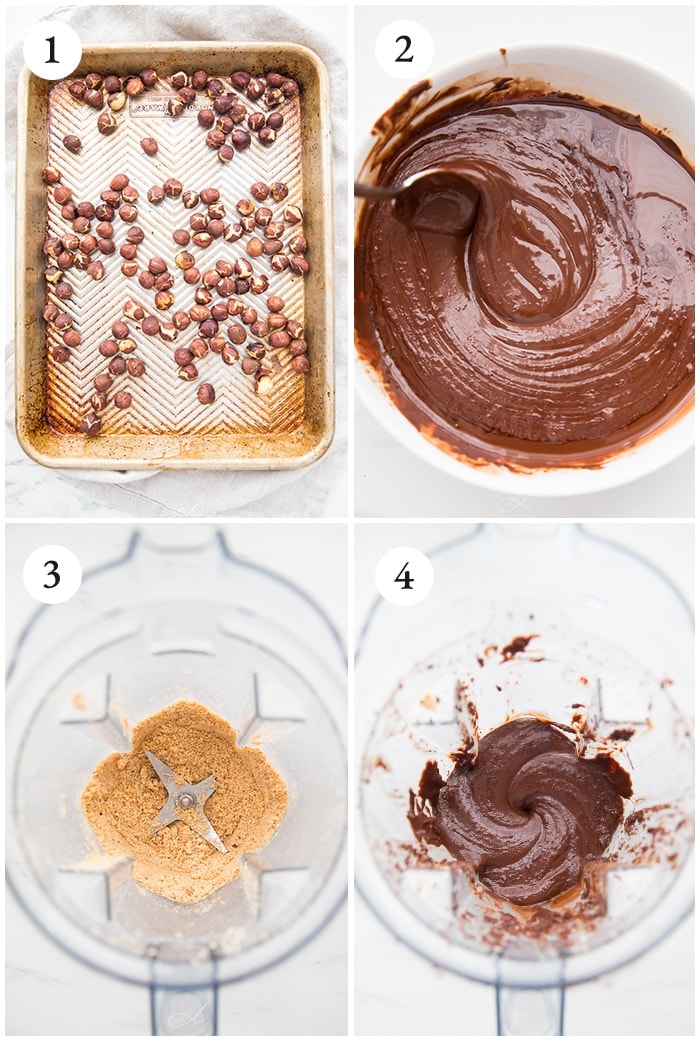 There’s really only a few simple steps. Start by roasting a cup of hazelnuts on a baking sheet at 350º F for about 12 minutes. You want the papers to turn a darker brown and the hazelnuts themselves to become almost a very light brown.

Remove from the oven and let cool slightly, then remove the skins from the roasted hazelnuts.

I like to do this by pouring the filberts (That’s just another name for hazelnuts!) onto a kitchen towel, covering them up, then rubbing the hazelnuts to loosen the skins. Then, just remove the skinless hazelnuts from the little nest of papers that will be left over. 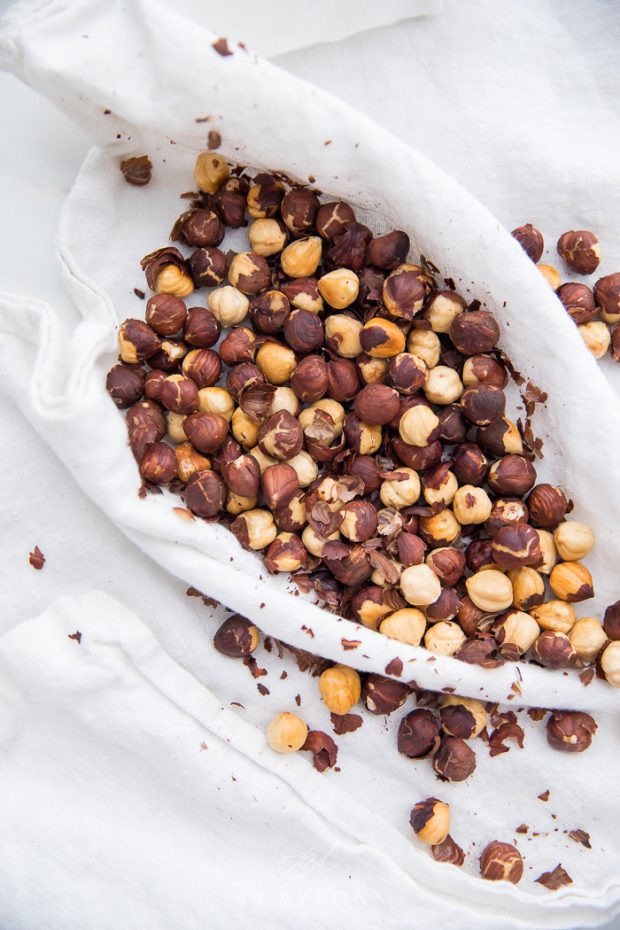 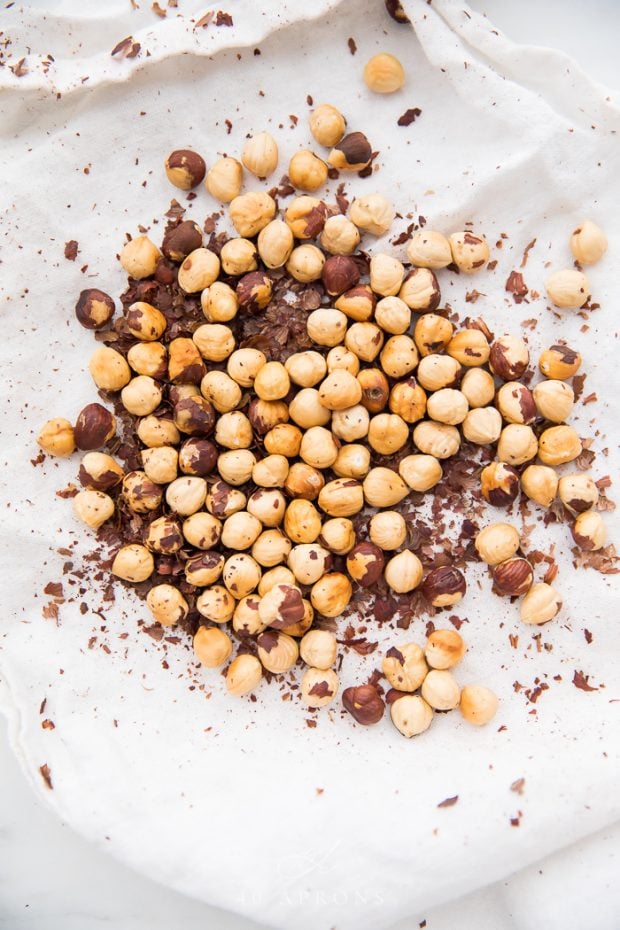 Transfer peeled hazelnuts to a blender and process until ground fine. Stir in the melted chocolate and pulse until combined.

If the mixture is too thick to process well, add in your desired milk, like almond milk or macadamia milk. Add in a couple tablespoons at a time then process until smooth. Repeat until the desired consistency is reached. I use about 4-6 tablespoons usually.

Scrape out of the blender and transfer to a jar.

No, store-bought Nutella is not vegan. It’s not paleo, either. Here’s the ingredient list:

Yikes. Sugar is the #1 ingredient, and coming in there at #4 is skim milk. That palm oil, too – eek.

Luckily, this vegan Nutella contains absolutely zero of those ingredients, making it a vegan and paleo treat!

If you don’t have the time to make this recipe, though, you can try the Chocolate Hazelnut Butter from Justin’s.

Keep in an airtight container at room temperature for at least 1 week. 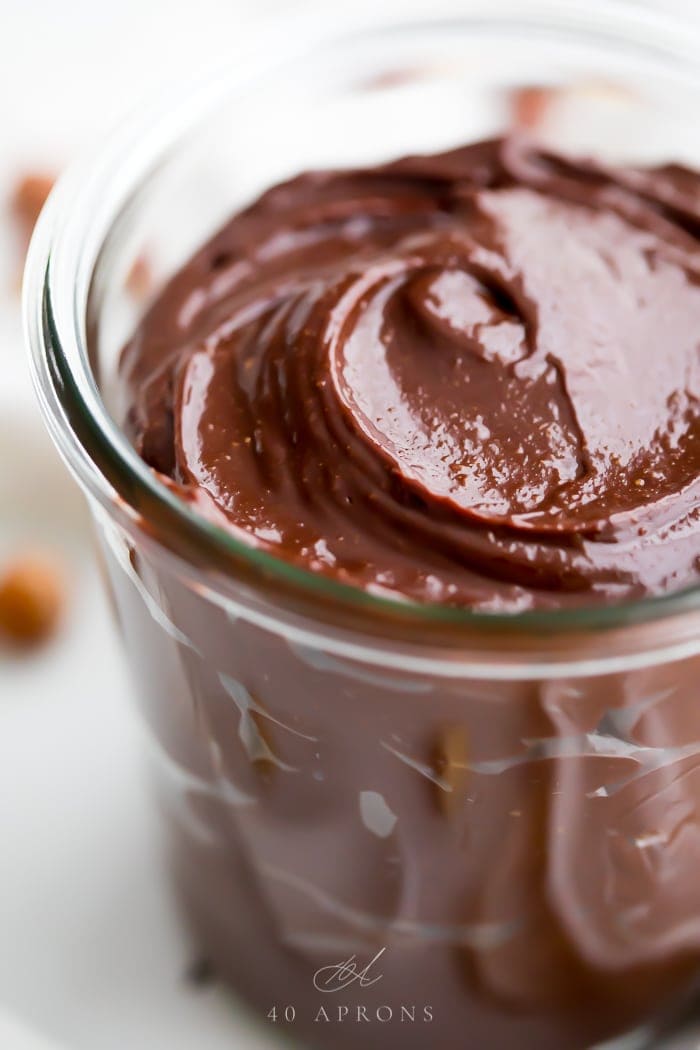 What to Eat with Vegan Nutella? 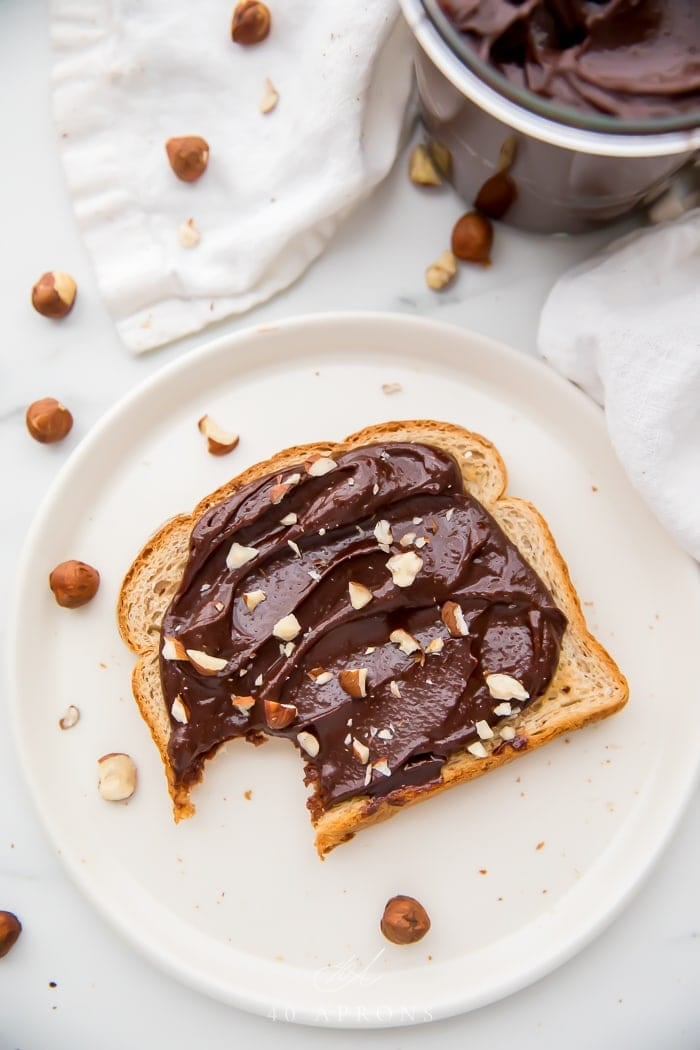 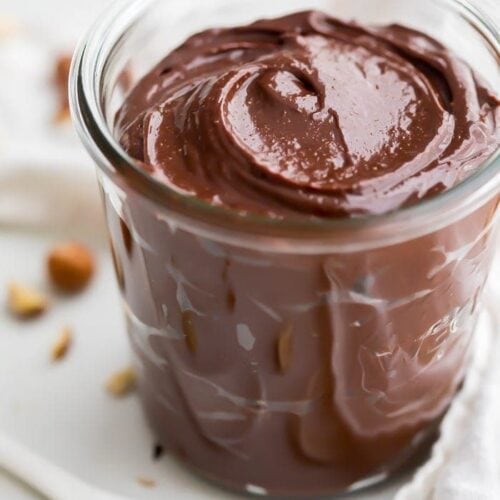 If you're strictly paleo, use a paleo chocolate like Pascha Dark Chocolate Chips. You may need to add more maple syrup to offset the unsweetened chips.  You'll need non-dairy milk to thin the mixture. I like unsweetened vanilla macadamia milk or almond milk. Coconut milk would be delicious here. If low carb, use Lily's Stevia Sweetened Chocolate Chips. Swap out the maple syrup for powdered erythritol, too. Be careful when melting the chocolate. Use a bowl that's wide enough so that the chocolate is not more than 1" deep. Only microwave the coconut oil with the chocolate chips. Start with 60 seconds then proceed with 30-second bursts. Stir very well in between each burst.

Update notes:This recipe was originally posted May 2014 but was updated with notes, new photos, recipe alterations, and new content April 2019. 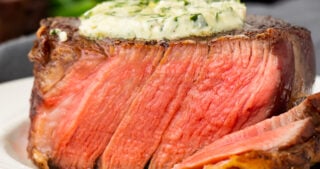