Miss Taco Bell Mexican pizza? This copycat tastes just like the fast-food fave, with layers of crunchy tortilla, beans, seasoned beef, tangy sauce, and plenty of cheese. A dead ringer for the Taco Bell retiree, this recipe is also naturally healthier and easy to make vegetarian, too.

Taco Bell has always been a late-night staple, although not so much now that I have kids. Their Mexican pizza was always a favorite, with layers of crunchy, crispy tortillas covered in rich refried beans, tangy sauce, and tons of melted cheese. When I heard they were retiring it from their menu (no!), I decided it was way past time to make my own version. This Taco Bell Mexican pizza recipe tastes so much like the original I was nostalgic for, plus it’s healthier! Now if I get the late-night cravings (just not so late), I can whip up a batch of these. I might even let the kids have some!

Taco seasoning – A half a packet of taco seasoning gives the beef in this recipe tons of delicious Mexican flavor.
Enchilada sauce – Tomato-y, tangy, and full of seasonings like chili powder and oregano, even a store-bought jar of this gives it authentic Taco Bell taste.
Salsa — This addition to the enchilada sauce makes it more than a sauce but less than a salsa. The perfect combo for the top!

How To Make This Taco Bell Mexican Pizza Recipe

Spray the tortillas with your spray oil on both sides, then sprinkle them with salt and prick them a few times with a fork to keep them from puffing up. Add them to a baking sheet and bake until they’re lightly brown.

While your tortillas are baking, brown and crumble the ground beef in a large skillet. Sprinkle the taco seasoning over it, then add the water and stir. Bring everything to a boil, and then turn down the heat. Let it simmer until it’s thickened.

Mix your enchilada sauce and salsa together. This will go on top.

While your beef is simmering, heat up the refried beans in the microwave. This makes them much easier to spread on the tortillas.

On each baked tortilla, slather a generous layer of the refried beans. Top it with the ground beef.

Place another baked tortilla on top of the beef. Slather the enchilada sauce on top and top it off with shredded cheese. Make the rest of the pizzas in the same way.

Bake until the cheese is nice and melty. Serve with your favorite toppings. 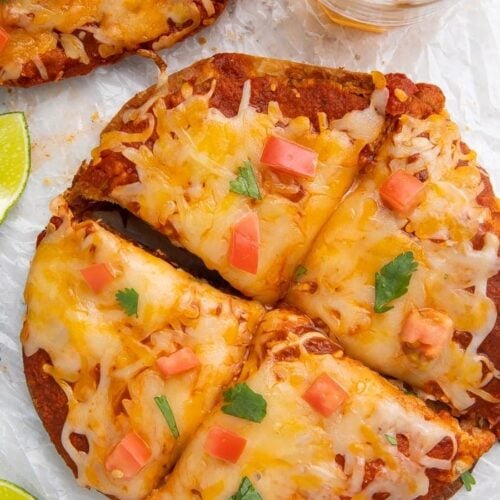 Late night cravings for Taco Bell's Mexican Pizza are no more with this delicious copycat version.

Wine pairings
I recommend buying wine from Scout and Cellar, especially for lower carb or sugar and the health conscious. There’s no added sugar to these wines, and they’re all much lower in carbs, calories, and sugar. For me, there’s no headache or fogginess the next day!
Wine with Taco Bell, you say? Trust me. A crisp, acidic wine with your Mexican pizza makes it a real adult meal. Try:
– Sauvignon Blanc, like 2019 Gallivant Sauvignon Blanc from Lake County, California
– Pinot Grigio, like 2019 Che Fico Pinot Grigio from DOC delle Venezie, Italy
– Pinot Noir, like 2018 Middle Jane Pinot Noir from Willamette Valley, Oregon