This thick, rich Instant Pot rice pudding is deliciously sweet with hints of cinnamon and vanilla. Super simple to make, this pudding is an easy but indulgent dessert or breakfast!

The full recipe is below, but here you’ll find all the steps for making this recipe perfectly the first and 100th time, along with useful tips and info!

Combine everything but the last three ingredients in the Instant Pot. Close and lock the lid.

Select high pressure and set the timer for 8 minutes. Allow 10-15 minutes for the pressure to build.

Natural release for 10 minutes, then quick release the remaining pressure. Unlock and remove the lid. Add in everything else and stir. 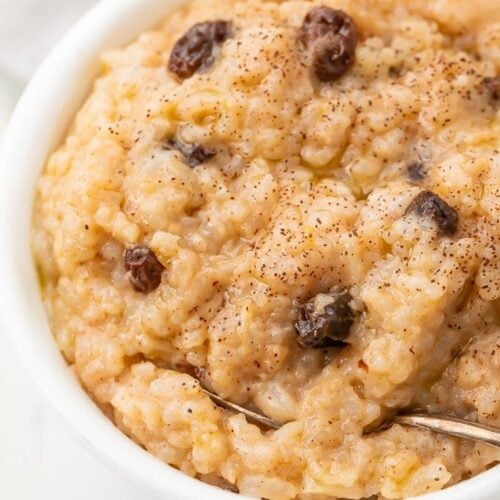 Wine pairings
I recommend buying wine from Scout and Cellar, especially for lower carb or sugar and the health conscious. There’s no added sugar to these wines, and they’re all much lower in carbs, calories, and sugar. For me, there’s no headache or fogginess the next day!
Wine may not be what you thick of with rice pudding, but it can be absolutely delicious! I particularly like:
– Chardonnay, like 2019 Fiddleneck Chardonnay from Lake County, California
– Cabernet Sauvignon, like 2018 Middle Jane Cabernet Sauvignon from Mendocino County, California
– Sparkling white wine (in cans!), like NV 14K Bubbly White Wine from California