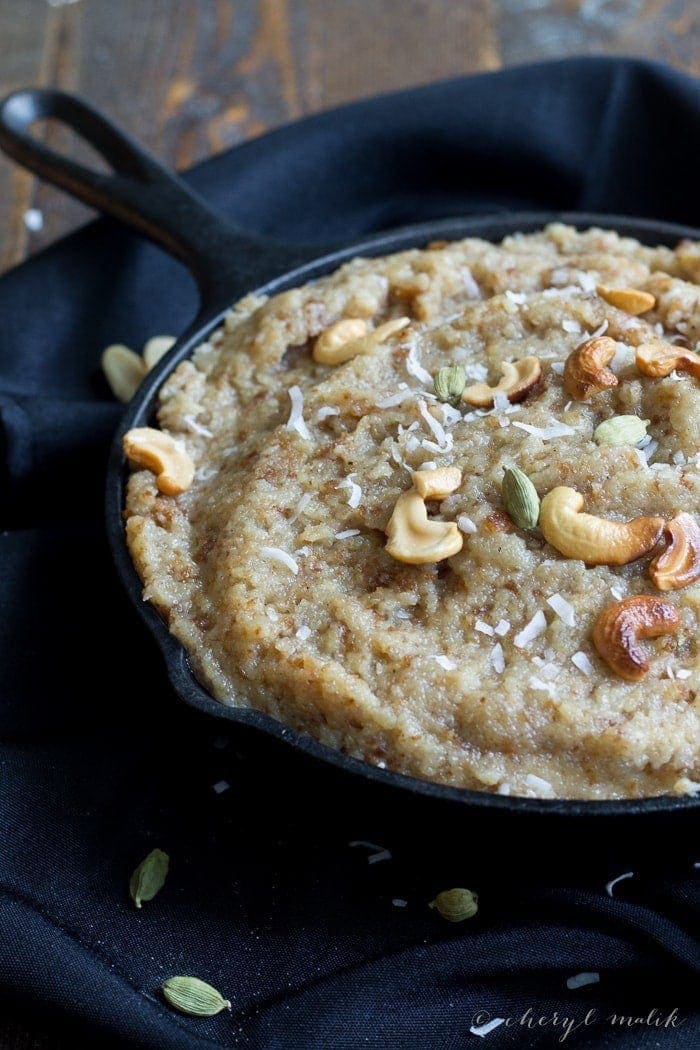 Bread halwa, the bread pudding of the East, the spectacularly economical and cardamom-spiced treat that’s totally rich and sweet, yet so completely homey. The dessert that O and I fight in public about when it’s served about our favorite Sunday Indian buffet…

You see, their bread halwa might just be one of our favorite desserts, ever, but they only make it occasionally. And when they do… it’s every man for himself. Our eyes are approximately 14 times bigger than our stomaches, so we load up our plates with the stuff–their version being positively drenched in ghee and totally covered in sugar–and groan a couple bites in. Bread, sugar, ghee, cardamom – doesn’t sound like it’ll take you out, does it? But oh man, that stuff can put you in a food coma for an afternoon! 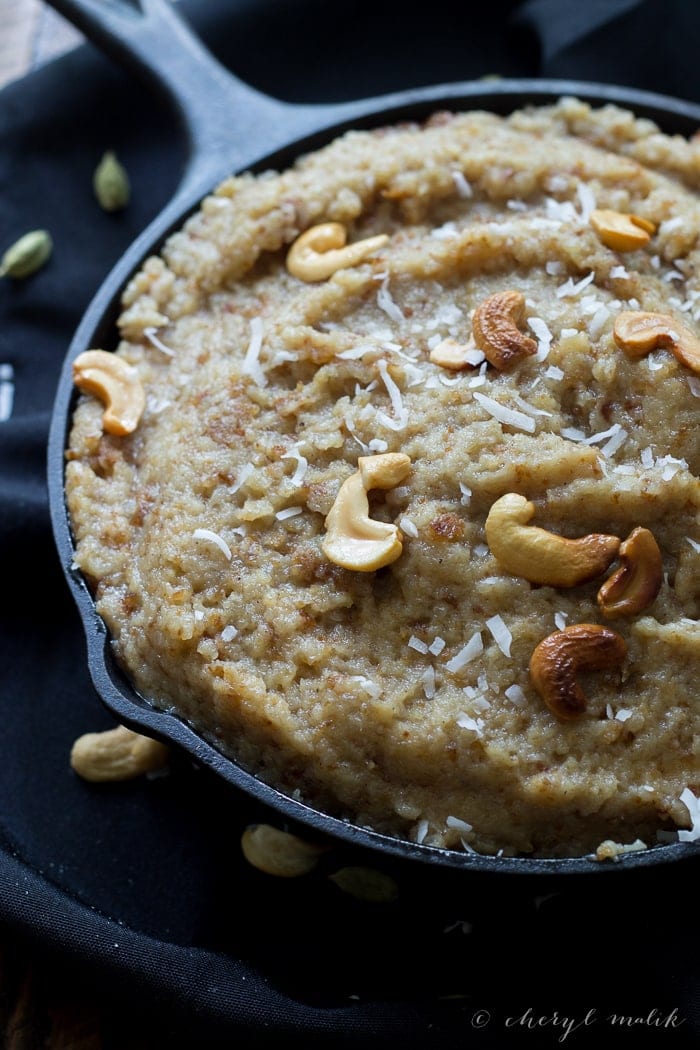 That’s why, when the über-talented Meriem of Culinary Couture asked me to partake in her virtual Eid party, I knew I had to take on bread halwa, veganize it, and lighten it up a bit!

For those of you who don’t know, Eid marks the end of Ramadan, which is the month during which Muslims fast from sunrise to sunset. As you might imagine, after a month of fasting during the day, Eid is full of fun and rich desserts! 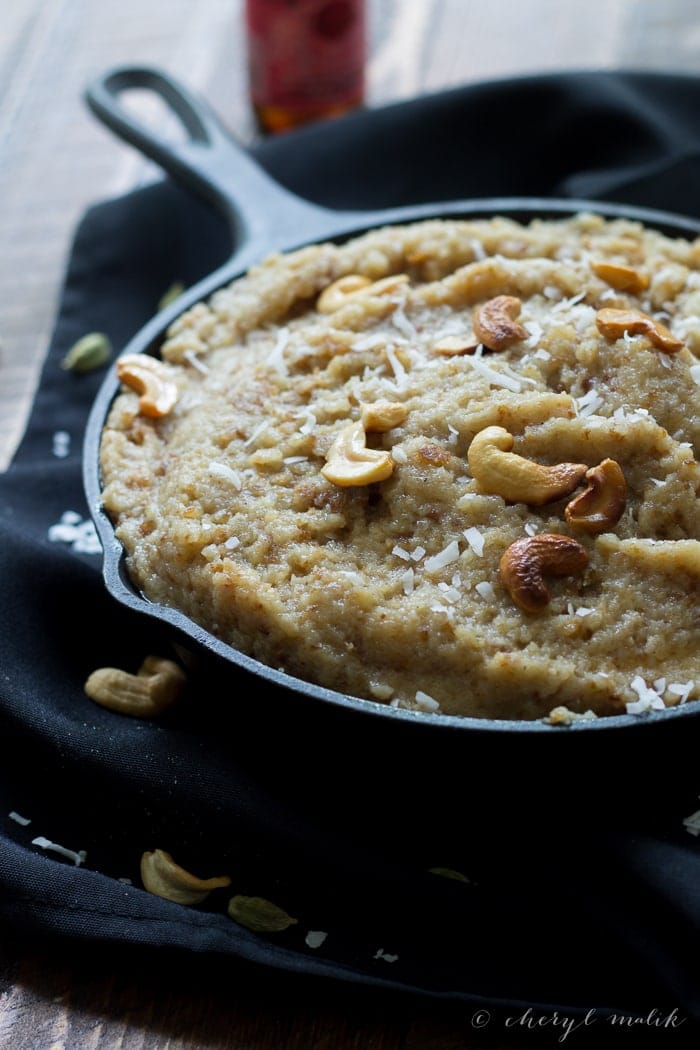 Though O and I aren’t necessarily Muslim, most of his family is. I’m fascinated by the culture of his father’s side of the family, as you might have seen by the touch of mendhi in our wedding photos! Whether you’re celebrating Eid or not, though, you should definitely celebrate something and make this vegan bread halwa! It’s an awesome way to use up a getting-stale loaf of bread, and you most likely have everything you need on hand, especially if you’re vegan (what, you don’t have a gallon of coconut oil in your pantry? ). It comes together pretty quickly and is simultaneously sweet and nutty, spiced and floral, satisfying but not too heavy. 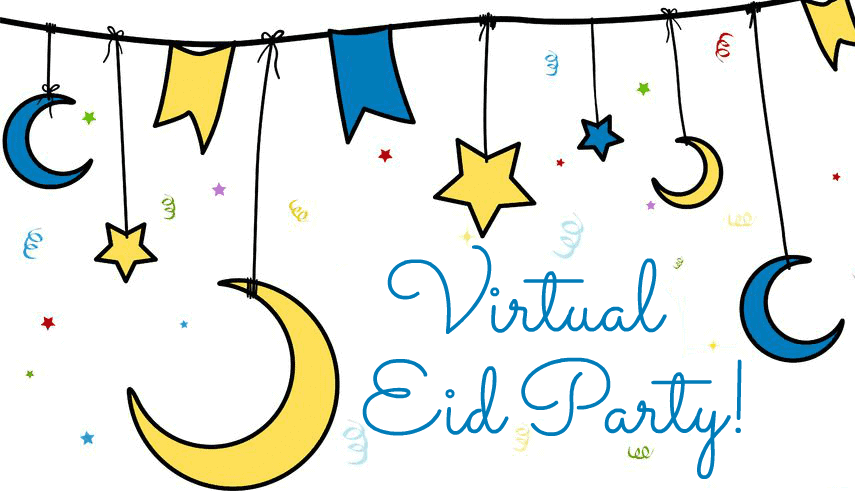 Check out the other posts celebrating Eid with Meriem! I can’t think of a better way to end the month of Ramadan than with some of these awesome recipes. 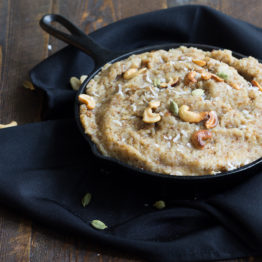 Spoon into a serving bowl, and garnish with cashews, raisins, grated coconut, and cardamom pods.