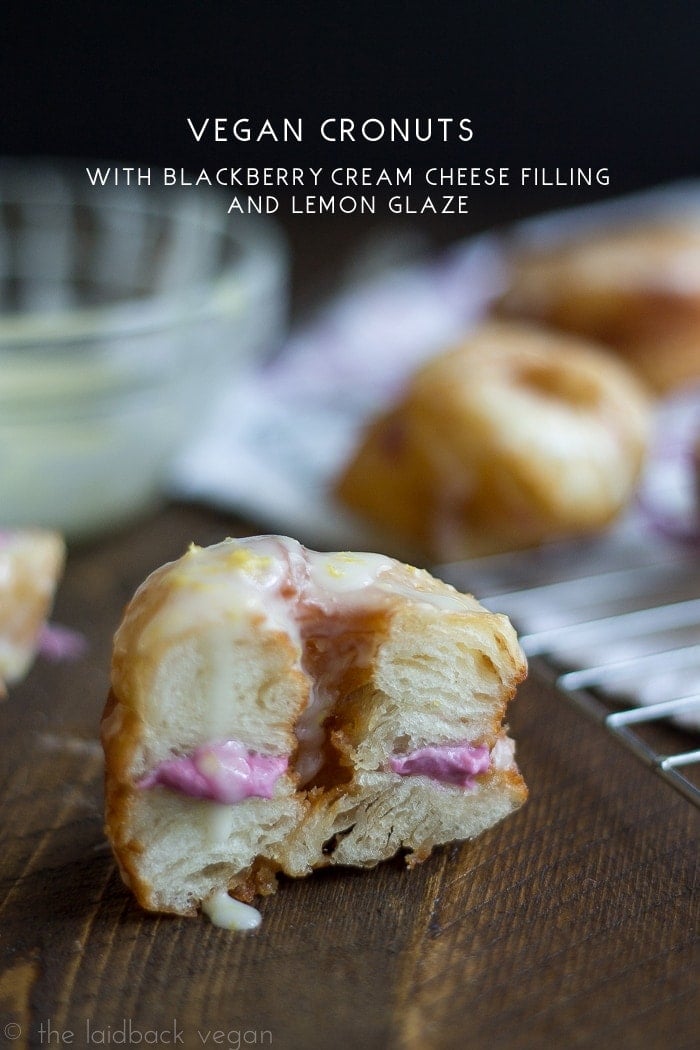 After last week’s Nutella, did you really think I could leave cronuts away? Not possible!

In case you’ve been “unplugged” for the last year, cronuts are a mix between flaky, layered croissants and yeasty, deep-fried donuts. Sound amazing? Well… 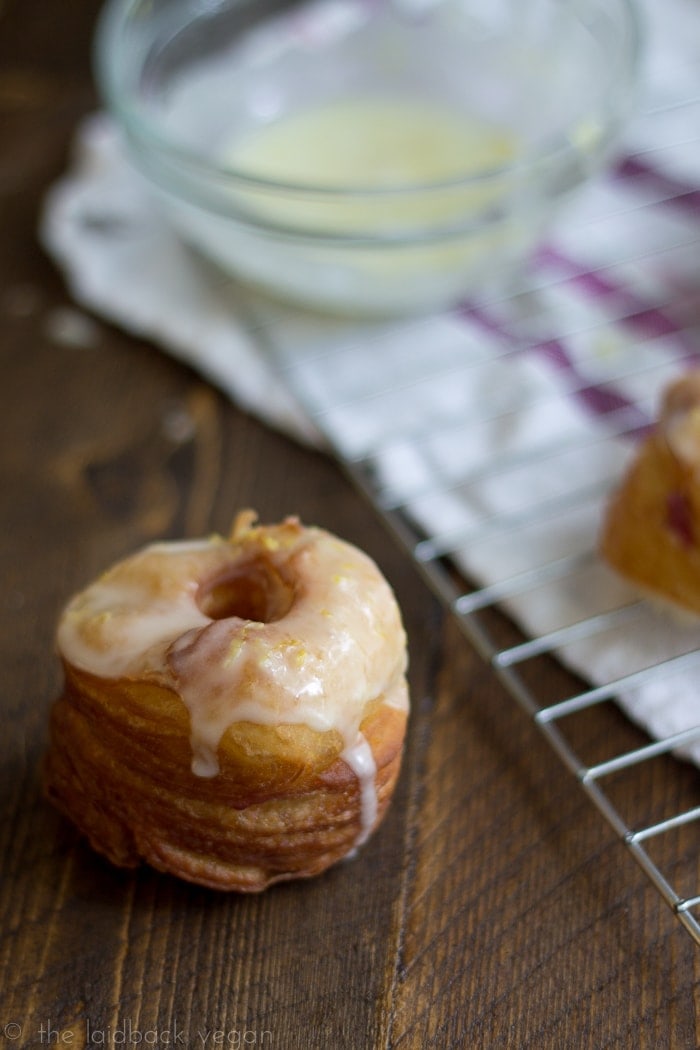 they are. They really, really are. The only trouble is that they’re absolutely laden with butter and other various dairy products, making them a no-no for vegans, if you can even find them! They’re based primarily out of New York–yeah, the pastries that people wait hours in line for–but now you can make them at home on your own time! No butter or Candy Crush marathons necessary. I mean, really, what else would you do in line that long? I digress.

You might know that I work with Tofutti to bring you delicious vegan dishes using their dairy-free products. I’ve been using Tofutti for almost ten years now, which made the partnership extremely special! Well, I was talking about trendy food concepts and their mind-blowing vegan Greek yogurt recipe, when it struck me: I have to make these “flaky donuts” at home. While we can’t call them by their trademarked name, we can call them “flaky donuts”. I mean, does a rose by any other name…? Yeah, you get it. VEGAN “FLAKY DONUTS”, PEOPLE. Vegan “flaky donuts”. 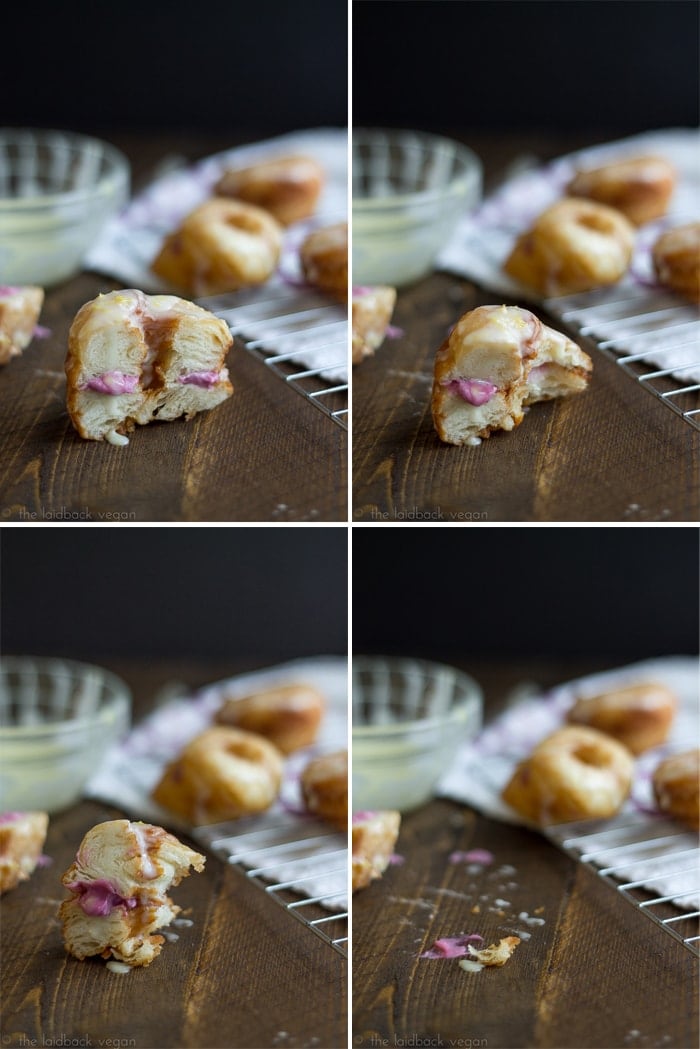 I’d heard tall tales of their intrigue, their otherworldliness. But, of course, being quite far from New York and not very much a fan of butter, I figured I’d have to make them myself to ever taste the suckers. Finally, the perfect chance presented itself.. and I’m so glad it did. They are of course flaky and deliciously deep-fried, but they’re at the same time tender, the perfect balance of fluffy yeast dough and buttery layers, filled with a fruity sweet-tart cream, topped with an aromatic citrus glaze. The blackberry-cream cheese and lemon glaze are brilliant on their own–sandwich a “flaky donut” in there and you’re basically in culinary heaven, rubbing elbows with Julia Child and Fernand Point.

I won’t pretend that these are quick or easy–they’re not. While they’re not exactly difficult, the recipe takes quite a lot of diligence, measuring, and patience. That being said, the active time is actually quite small, and the outcome is so, so worth it! 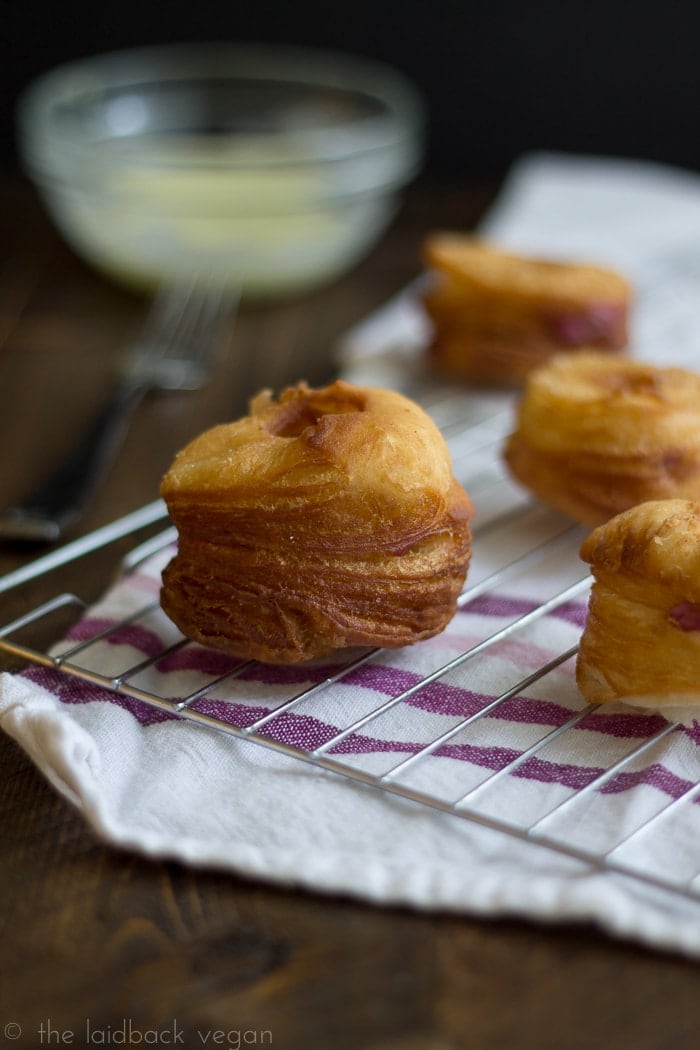 You will need a very long, thin pastry tip or injector to aid in the filling of these bad boys, but I made do with a Ziploc-bagged contraption and a long thin pastry tip that I use for eclairs. 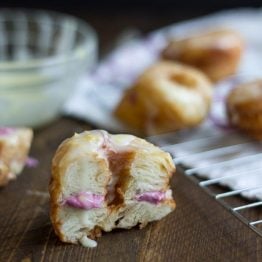 I've not yet frozen, defrosted, and fried any remaining dough but I plan to.. I would imagine that if you freeze the dough before the last rise, in an air-tight container, you should be able to defrost, complete the final rise, and carry on as normal. Because who can really eat 12 'flaky donuts' in one sitting?
....she says, as she looks away suspiciously. Adapted from loosely from About.com

Make sure you check out Tofutti’s blog and support those who support the Laidback Vegan!