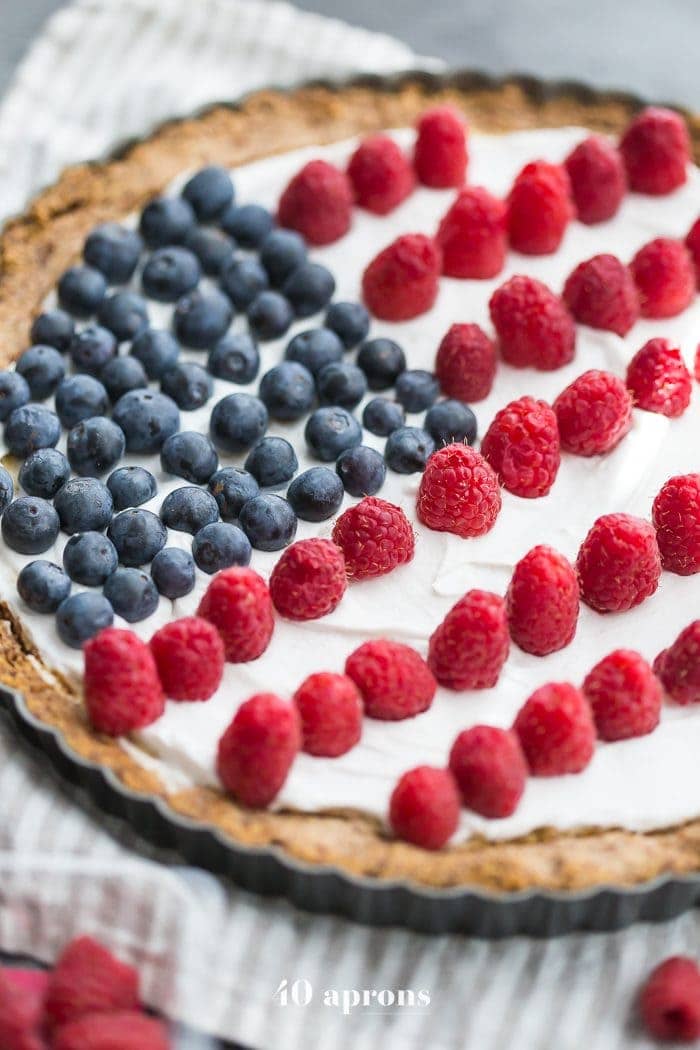 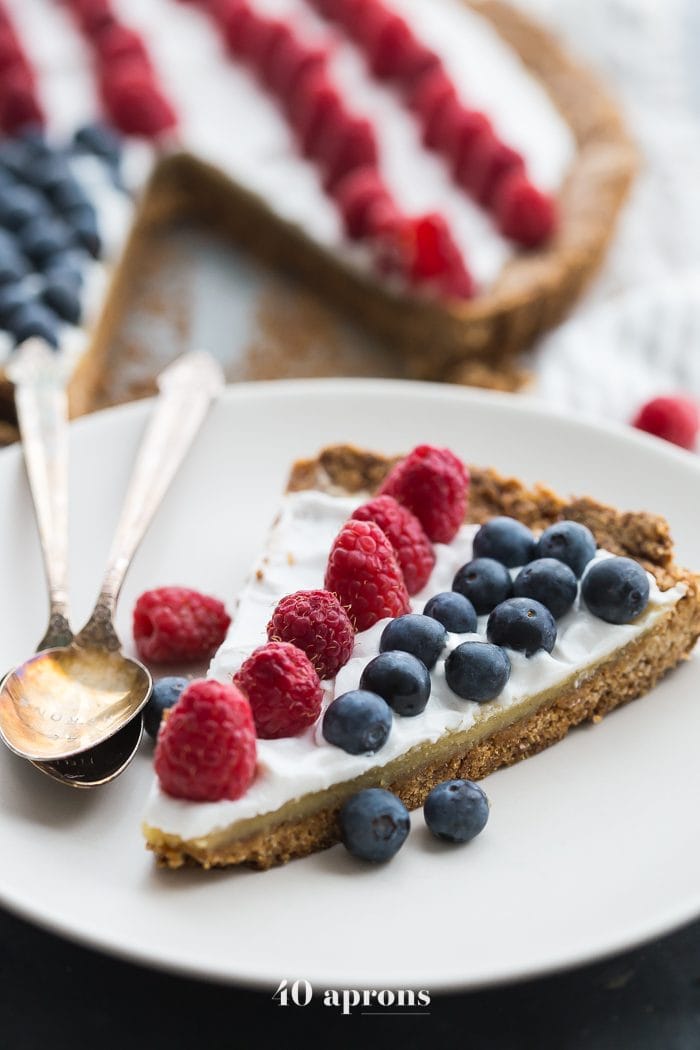 I’ve found the best of both worlds.

I spent most of my late teens and early 20s proclaiming my francophilia, recounting often the wine we’d drink on the métro when headed into the 8th Arrondissement, celebrating Bastille Day with more fervor than I’d ever touch the Fourth of July. And, sure, my obsession with all things French started early; I got my mom to buy me a “teach yourself French” book when I was 13 that I’d work on while at my sister’s soccer practices.

I knew the translations for all the ballet terms at class and always assumed that France would “feel like home,” that Paris would be the city where I was meant to have been born, that I’d effortlessly step into place with dinner parties and perfect scarf manipulation and living gracefully in a 300 square foot apartment. 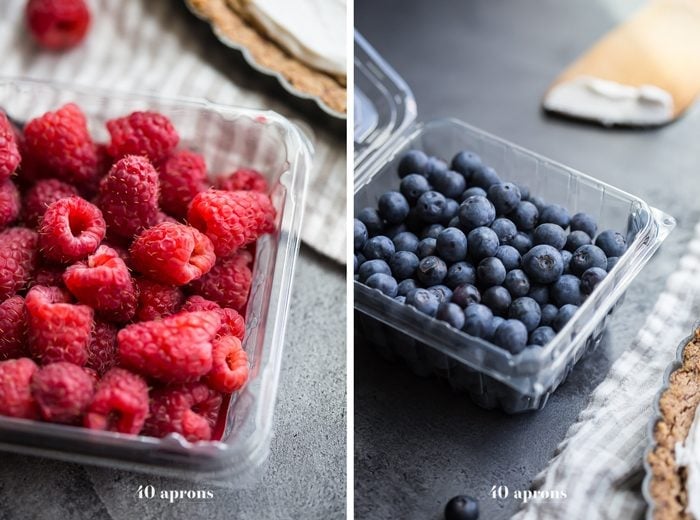 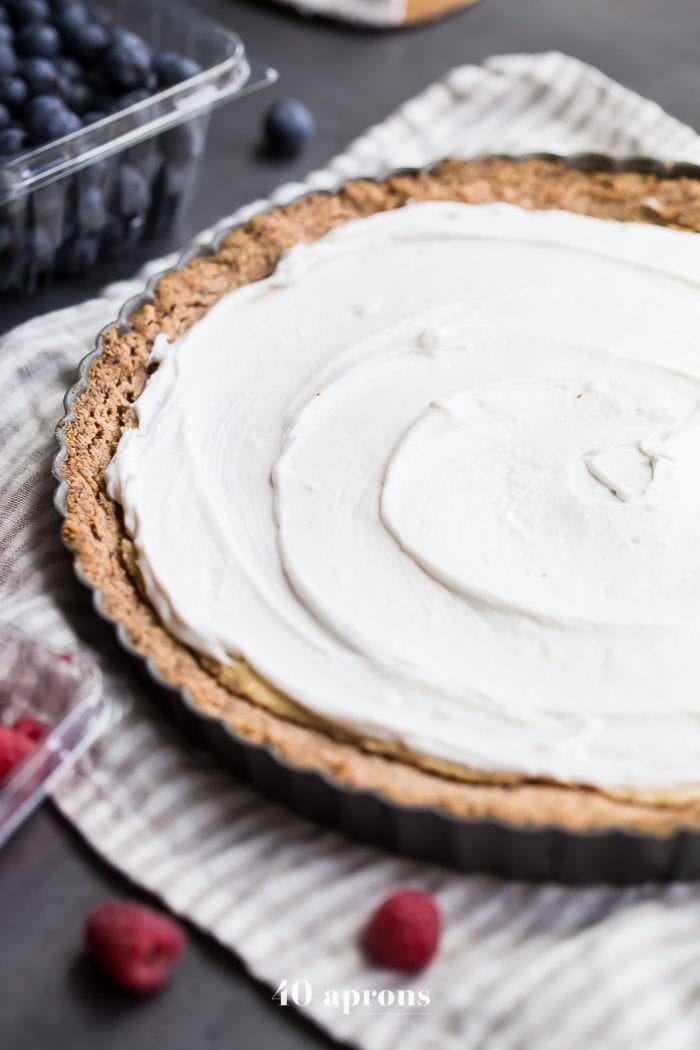 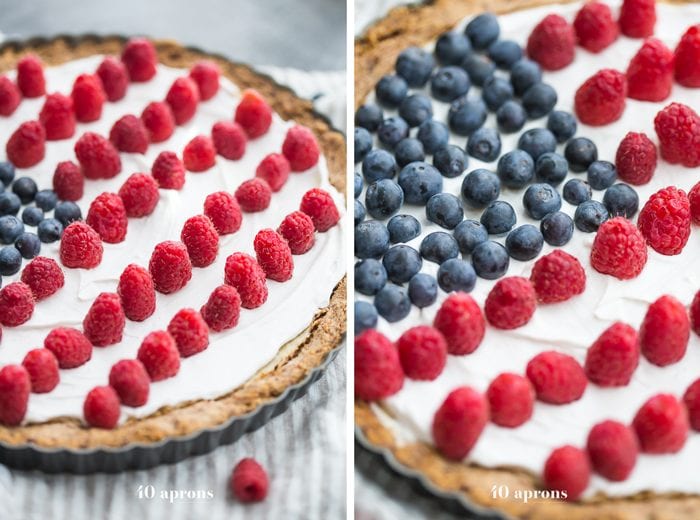 Except none of that really happened. I love Paris and visit as often as I possibly can, but it’s not home, not the country that my soul loves. I bet you think, considering this is a recipe for one of my very favorite paleo 4th of July desserts, that I’m going to say the place where I feel most at home is America, don’t you?

TWIST. It’s Spain. And Mexico. Of course, America is truly home and will always be one of the places we live and feel comfortable. But the countries where my personality swells and feels effortless and joyful? Totally Spain and Mexico.

But realizing this, after several trips to Mexico where I worked for weeks to convince O to buy real estate and after our trip to Spain with Leo where we plotted and planned our ultimate, retirement-sparked move to Barça, something else happened. I fully embraced America as home, started rooting obnoxiously for us at the Olympics and at World Cup, and started developing paleo 4th of July desserts in, oh… March. 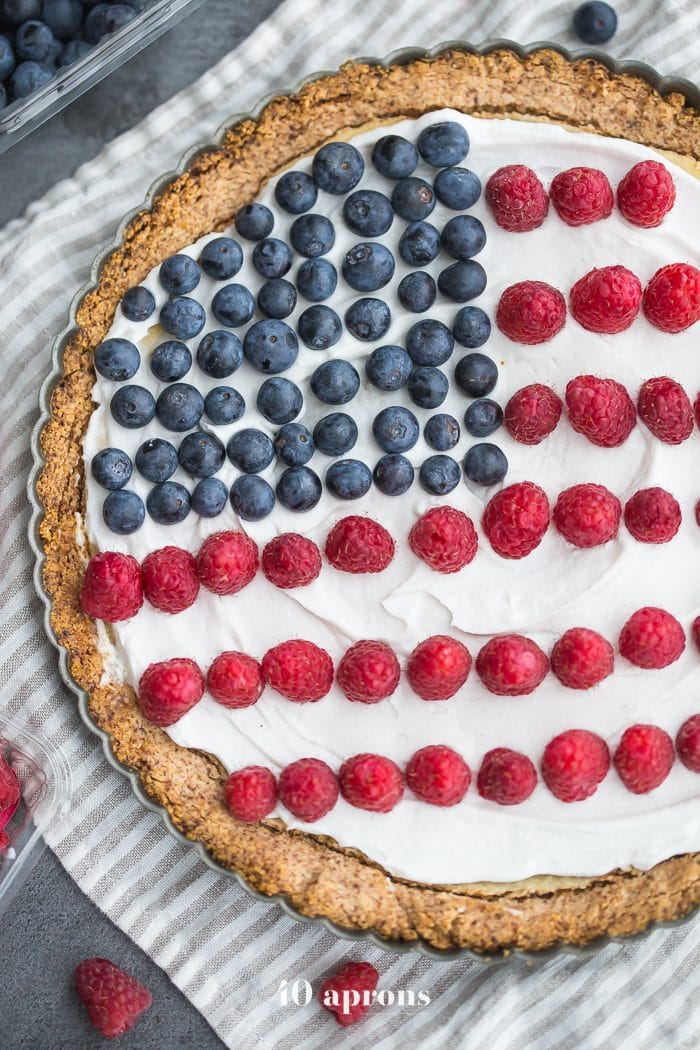 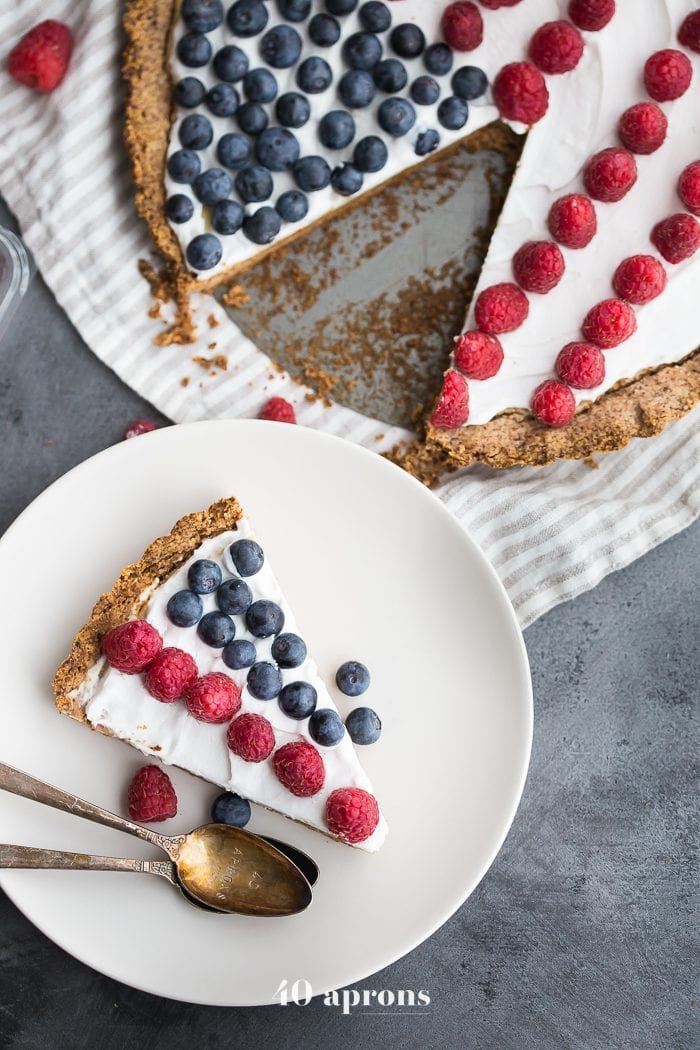 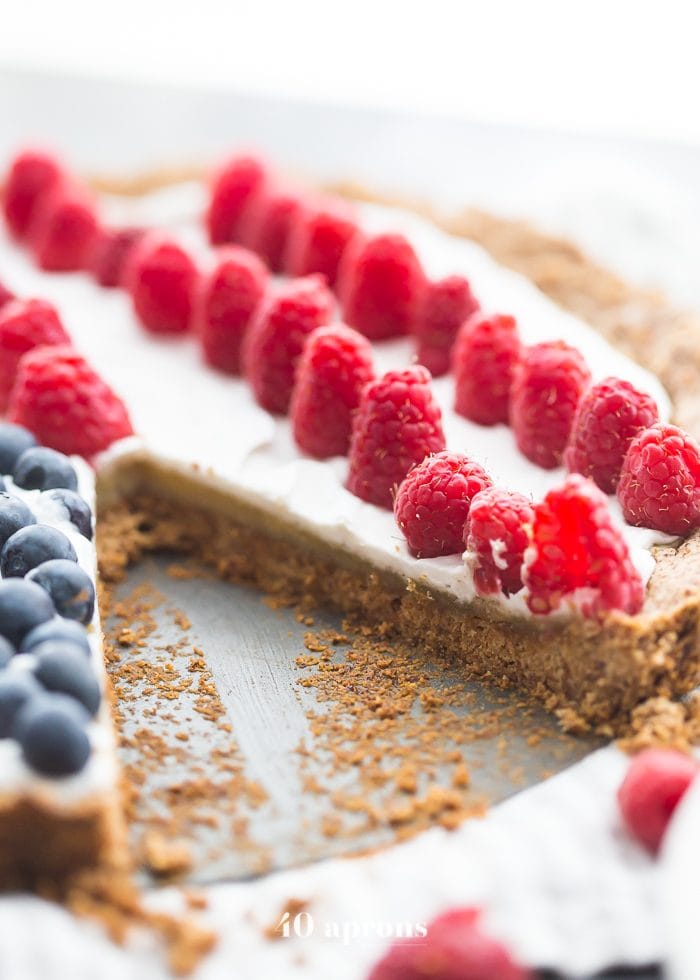 Yet I still can’t get behind the electric blue that shocks Pinterest when you search for “4th of July recipes.” In my opinion, the blue curaçao should be swapped for frozen blueberries when it comes to 4th of July cocktails, and we should bump up the elegance of 4th of July desserts, while we’re at it. Let’s take inspiration from the French, from the rich pastries that are loaded with flavor and smeared with sophistication. We’ll start with an easy coconut oil shortbread crust, pressed into a fluted tart pan, fill it with an easy almond frangiapane, and top it with cool coconut cream and fresh fruit. 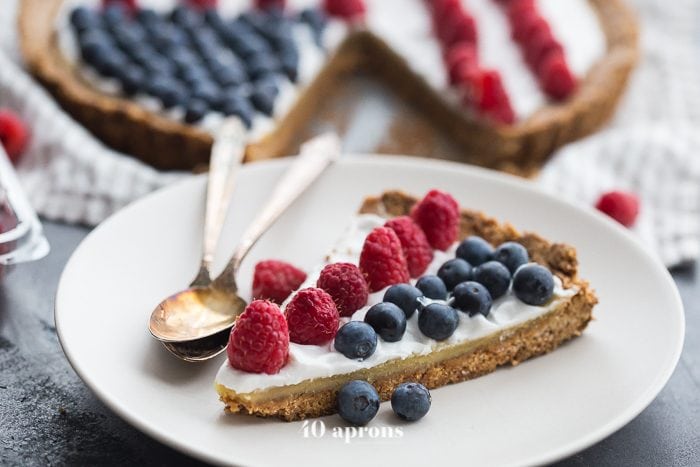 It doesn’t get more fresh, striking, or delicious than this for your paleo 4th of July desserts, although I’m pretty partial to my paleo 4th of July flag pie and my paleo red, white, and blue cocktails. This tart is inspired by my paleo rhubarb tart, which is out of this world delicious, and just as beautiful. Not only that, it’s so fresh and healthy, making it taste indulgent without working against your commitment to healthy eating.

This paleo flag fruit tart is truly the best of both worlds: one of the most festive paleo 4th of July desserts that takes inspiration from French pastries. 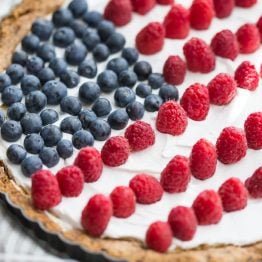 To make vegan, substitute a flax egg for the egg in the frangiapane layer. Combine 1 tablespoon flaxseed meal with about 2 1/2 tablespoons water and set aside for 5 minutes then use as directed. I recommend this 11-inch tart pan and this food processor.