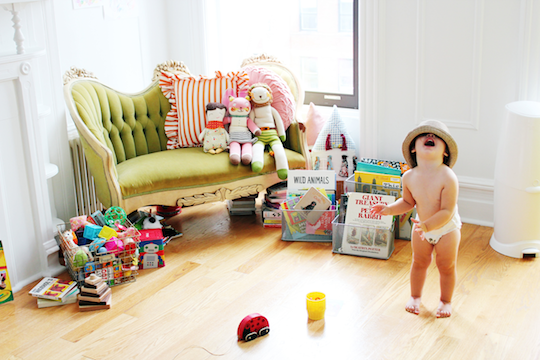 I’m completely paralyzed, glued to the screen. The only motion in the room is my middle and ring finger deftly swiping up the trackpad, as the wheels in my head start turning. I’ve found new blogs, blogs of young, hip, beautiful mothers living in Austin and New York who, in every picture, look happy and perfect. I make a mental note to blog about the paradox of displaying personal lives in a way that isn’t all that personal, leaving readers to feel a pang of guilt. Why am I ever mad at my dog? Is it bad that I don’t stop O every time he comes into the kitchen for a quick, I don’t know, eskimo kiss or something? Why don’t my t-shirts come from Barney’s?

Yet my fixation is the interior decoration. White and clean, yet filled with brightly colored settees and geometric mobiles over the baby’s perfect white and clean crib. A quirky pale blue owl figurine and elementary-school globe bookend a copy of The Little Prince, but the baby is content to walk around in a diaper and mama’s patent nude oxfords.

I start pinning immediately and hope no one will notice that my new style source is based around a nursery. Will people think I’m pregnant? I worried enough about starting a wedding board before O officially popped the question (Honey, it doesn’t count if you don’t have a ring and you ask as we’re driving down Main Street), until I realized that nearly every girl–single, engaged, married, divorced–had one. Nurseries don’t provide the same luxury, yet I’m entranced completely. How did they find this mix of clean and crisp, quirky, colorful, and totally, casually cool?

I make it my life goal to replicate the scene.

I begin thinking about my own living room, packed with boxes of O’s books and photo albums with maps on the covers, which are supposed to look old, or like it’s filled with pictures from your travels to Shanghai, or something, I suppose. I can’t stand them (he doesn’t didn’t know this).

This is O’s idea of the perfect reading room, except for the fact that it’s missing a heavy antiqued-looking globe suspended in a heavy dark wooden frame:

How exactly did I come across that picture? I searched Pinterest for “masculine libraries”.

My idea of a perfect library?

with a touch of

I start creating a mental game plan for turning my living room, with the modern dark brown leather, L-shaped couch, into a clean, chic space. I realize that I must, first and foremost, get rid of the dark red and blue Oriental rug, one corner of which is currently pinned down by the corner leg of the couch. Our puppy uses all her might to unstraighten the three free corners.

But O loves that rug. It was his dad’s; it makes him feel like any space is “cozy”. I want to get rid of dark and “cozy” and let fluffy blankets we find at a small boutique on vacation fill that role. What about colorful geometric mobiles do you not find cozy? Do you forget where places are in the world? Did you forget how to spell “map”? Can’t you just Google something if you want to know where it is? I’m not letting an antique globe come into this house.

But I’m not with an artist from Austin. I’m not in love with a photographer from Brooklyn. A couple weeks into dating, I visited O’s for the first time and laughed at his prints of the Great Wall of China and “Lunch Atop a Skyscraper”.

It wasn’t until later that I discovered the motivational poster in his bedroom, but, at that point, I wasn’t surprised.

He agreed to let me be his “interior decorator”, and I convinced him to pick up a few great barstools from West Elm. But that was when he still wanted to impress me. Today, it’s a game of tug-of-war, except he has no idea we’re even playing.

I ache to fulfill this need for quirky, clean style, but I know the conversation we would have if I told him I don’t want his giant leather chair to come along in the move. I ask him to pick out bookcases, and he’s automatically drawn to huge, dark, clunky pieces. I prefer pieces that look like they might have come out of a warehouse.

But is it worth it to me to rule our home with a heavy decorator’s hand, all in the name of a sleeker Pinterest? Is it worth the forced removal of O’s style (a generous term, he’ll admit)?

But is it worth it to me to forcibly remove my aesthetic dreams, in the name of not removing his?

How much of those bloggers were squashed out in the name of compromise? Do they get everything they want? Are their husbands subscribers to the Design Within Reach catalogues? Were they like that when they met? How did I find a man who plays Fantasy Football?

I suppose that, like it or not, we are what we are. My relationship is no longer a hobby, but a full-on lifestyle. I suppose I’ll inherit the rug and Google “modern decor with a dark Oriental rug” quite a lot. One day they’ll refer to our philosophy of décor as femiculine chic. Reading in an oversized, dark leather chair, under a gold geometric base lamp.

If O comes with a heavy, awful globe, at least I know you can find us in the same spot on it.