Hey! I think I know you pretty well by now, don’t you think? I think I know you well enough to say that I bet on Christmas morning, you want to be standing at the oven, making sure the scrambled eggs don’t burn, rushing to the counter to fill the waffle iron back up. Right? ….Right?! 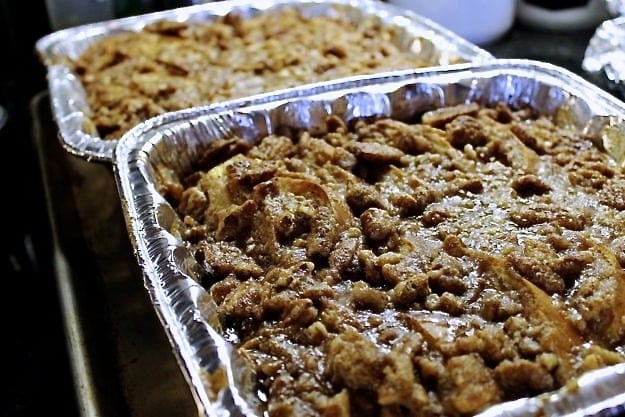 In an alternate universe, yes! It sounds like a blast. But in the here and now, the last thing we want is to be drawn away from the part of Christmas that makes Christmas fun–family, excitement over presents, and good cheer and stuff. But we also want an unbelievably delicious and luxe breakfast that makes the whole family stand in awe (and a wee bit of jealousy) of us.

I have just the thing. 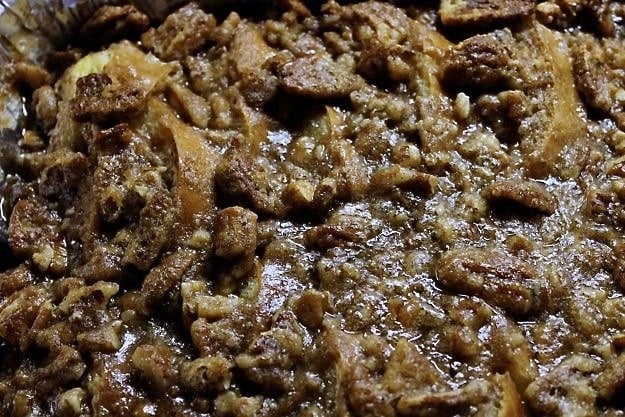 Yes, you’re right. It’s a Paula Deen recipe. But Paula Deen-before-the-diabetes, because Anthony Bourdain won’t let me even think her name in my head anymore.

I don’t recommend eating it everyday. But Christmas? I’m all yours, baby.

It’s simple, and you throw it together the night before. Smear on some praline topping in the morning and bake for 40 minutes. Tada!

I made a double batch of these and Christmas Breakfast part II for O’s office, and they all told him he “better not screw it up” with me. I think it was worth it.

Straight from Paula Deen. Never thought that sentence would ever leave my fingertips.

2. In a large bowl, combine the eggs, half-and-half, milk, sugar, vanilla, cinnamon, nutmeg and salt and beat with a rotary beater or whisk until blended but not too bubbly. Pour mixture over the bread slices, making sure all are covered evenly with the milk-egg mixture.

3. Spoon some of the mixture in between the slices. Cover with foil and refrigerate overnight.

4. The next day, preheat oven to 350 degrees F. Spread Praline Topping evenly over the bread and bake for 40 minutes, until puffed and lightly golden. Serve with maple syrup.