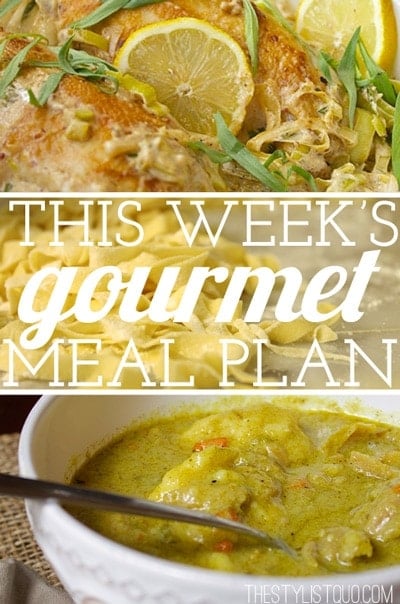 This week we spent

Want to cut right to the chase? Check out

Oh, and don’t forget to check out the magazine subscription giveaway we’ve still got going on!

This week was another unusual one, which really just leads me to believe that there will always be these strange exceptions, always.

Our anniversary is coming up on Saturday, and instead of wasting $150 out, we decided to make a painfully luxurious meal at home. Ready for this menu? I mean, really.. are you ready?

If we don’t suffer massive heart attacks that night, it’ll be a pleasure, I’m sure.

I actually.. forgot that our anniversary dinner was this week when I planned the meal plan, and I’m blaming it on the fact that I was planning for the first week in October, though it was still September. That’s my story.. stickin’.. to it..

Either way, I’ll be tacking on about 40 bucks to this week’s meals to whip up that ridiculously luxurious meal, which isn’t bad at all when you figure how much that feast would cost out, even at the most couponed and reasonable of spots.

Luckily, we ate Sunday dinner at my parents’ house post-football, so that shaved off a bit.

I do plan on squeezing that extra anniversary dinner $40 out of our monthly budget, though, if only as a challenge to myself. We’ve been spending only about $40 weekly anyway, and with a $200 monthly budget, I think it’s doable.

On to the meal plan! I’m keeping our original meal plan and groceries in here, since I doubt many of you will be whipping up such a hedonistic feast on the reg.. that, and, I haven’t done the shopping for the big night yet!

I replaced the leeks in my beloved creamy Dijon-tarragon chicken with leeks with some high-heat sautéed mushrooms and steamed potatoes to switch it up a little, considering we had this two weeks ago. It’s got to be pretty darn good, because I usually abhor repeating recipes frequently at all.

I brined the chicken with a quick brine and it was to-die-for. I used the legs and thighs for the next recipe and froze the wings.. a new practice I’m taking on since we usually eat the wings just because they’re there. After a few chickens we’ll have enough wings for a meal!

To take on this variation, slice about 8 oz. button mushrooms thickly and sauté them in 1T butter + 1T neutral oil in a large cast-iron skillet over medium-high heat, until they’re browned. Remove from the pan and begin the recipe. Simply leave out the leeks!

Boil or roast some potatoes and serve under the chicken, mushrooms, and sauce.

Oh, mama. Is there anything more comforting than a dish like this? No, there’s not.

I’ve been using the Pioneer Woman’s recipe for at least a year now, and it’s delightful. The dumplings taste nothing like those slimy little creatures that you got at Cracker Barrel when you were a kid. Instead, they dense yet a bit puffy, almost like matzoh balls. Amazing.

The chicken is cooked perfectly (a brine helps!), and the soupiness is so comforting. I’ll be posting the recipe here soon, but for now, check out Ree’s.

Quiche is one of our “mega recipes”–a dish I can make once that will feed us at least three times. Pot pie another one of those, as you may have noticed from the meal plans which listed the dish over a span of two weeks! We’ll eat this quiche for two dinners and we’ll likely each eat one lunch of it. Pretty darn amazing, especially when you consider how cheap it is!

O loves crab, so I splurged on a little can this week. If we weren’t trying to scrimp so much to save for the honeymoon, I’d have picked up a jar of lump crabmeat from the seafood department, but we’re keeping it tight these days, guys! With a homemade, buttery, and impossibly flaky crust, it’ll satisfy our gourmet cravings and our honeymoon budget.

This Saveur recipe is a good starting place until I post my own recipe. Use half of SmittenKitchen’s ultra-perfect pastry recipe. Replace the bacon with whatever-you-want. For us, that’ll mean a can of crab, a few super thinly sliced scallions, and some chives from the garden for color and a delicate onion flavor.

Random combination, I know. But we love sweet potatoes, and they’re so darn good for you! Plus, they’re super cheap and stupid easy. And with a fiancé who doesn’t eat half of the vegetables at the store, I’ll take what I can get. What can I say? Practice for children.

Since I had to buy a whole chicken this week (after we ran out of the frozen chickens I stockpiled when they were on a crazy-cheap sale), I wanted to keep the cost down. An ad-hoc meal is the perfect way to do that. From my eBook..

The ad-hoc meal is worth a closer look. The Latin term “ad-hoc” roughly means “for this”. In budget gourmet, we apply this to any meal that you don’t plan for but just sort of “whip up” with what you have on hand. Literally, a meal “for this”–for the current cravings, to use up what you currently have on hand, to explore your culinary curiosities and creativity.
There are a couple righteous effects of the ad-hoc meal:

Depending on where your culinary creativity is at the moment and how much money you want to save, how often you plan for an “ad-hoc” meal will vary. I find that simple, yet classical dishes lend themselves tremendously well to ad-hoc meals, especially if you have little leftover food from the week.

In the eBook, I go into greater depth about stellar ad-hoc options and jumping-off points. Typically, I end up making fresh pasta and throwing in whatever we might have on hand. Luckily, that almost always includes bacon, eggs, cheese, herbs, and a bit of produce. Try it! It’s so good for your wallet and your creativity. It’s not bad for the environment, either!

Thanks for the lasagna, mom and dad! Make dessert next time..

Our total this week was

Check out what we actually spent and on what!